Joan Meyers-Levy, a professor of marketing (hmmm) there, says that recent studies have shown that “when a person is in a space with a 10-foot ceiling, they will tend to think more freely, more abstractly. They might process more abstract connections between objects in a room, whereas a person in a room with an 8-foot ceiling will be more likely to focus on specifics.”

I don’t know. I can see it for the SFMOMA rotunda, shown above. But what about the Oracle Arena, where I watched the Warriors defeat the Mavs, shown below? It’s got a pretty high ceiling. I suppose in a sense you could say the Dubs fans were thinking abstractly, but doesn’t that sense become itself so abstract as to be useless? 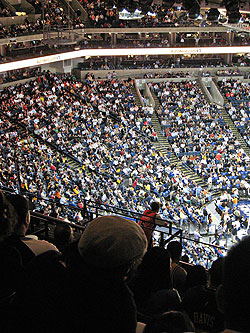