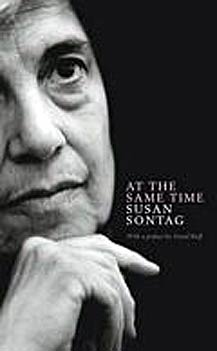 Susan Sontag has positive associations for me for a personal and I suppose fairly trivial reason — she sent a generous letter to me when I was director of Mercury House saying she admired our publishing program. You might be surprised how rare that kind of gesture is.

Eliot Weinberger appears to put personal considerations behind him in his review of Sontag’s At the Same Time, which was originally published in the New York Review of Books and has now been published online by Powell’s. It is a remarkably evenhanded review (which takes the occasion of the book’s publication to survey Sontag’s whole body of work). Weinberger sees Sontag as a flawed figure whose production never quite equalled the conception, or perception, of it.

He does not hesitate to fault Sontag for such things as a lack of humor, a disinterest in contemporary poetry, a tendency to favor male writers. At the same time, he gives credit where it is due.

In the end, there are three Sontag books to read: On Photography, Illness as Metaphor, and a third, invented volume, drawn from the other books, of her selected portraits (Artaud, Benjamin, Barthes, Canetti, Cioran, Godard, Leiris, Lévi-Strauss, Pavese, Riefenstahl, Sebald, Serge, Tsypkin), for, as an idolizer, she wrote her best essays on single figures, rather than larger tropes. Three good books is a lot, more than most writers achieve, though perhaps not what she imagined of herself, or for herself. In 1967, she had written in her journal:

(By “schmuck” she meant her personality flaws, and her inability, at the time, to form long-lasting relationships.) It is a Hollywood cliché that a beautiful actress needs an element of ugliness to become a great star, and one might say that a genius needs an element of stupidity, or something wrong, to become a great imaginative writer. Sartre certainly had his. But Sontag seems to have had nothing stupid about her at all. Arguably the most important American literary figure or force of the last forty years, she may ultimately belong more to literary history than to literature.

I don’t think there’s any need for me to argue particular points or to review his review. Instead, just go check it out — it’s well worth reading.