A loss for words 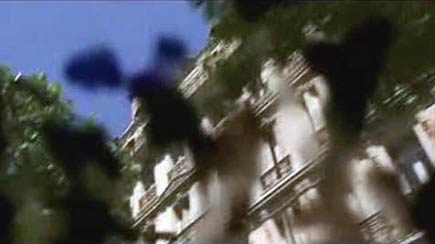 Literacy is addictive. Once you start reading you don’t go back. But what happens when you’re not allowed to read?

I went to see an ophthalmologist about some trouble I developed in one of my eyes — large dark floaters looking something like the image from Two Days in Paris (in which Julie Delpy has trouble with her eyes) above. A piece of my retina had become detached, and I was advised to have immediate laser surgery (which wouldn’t fix the problem but would prevent worse ones). It’s a pretty minor operation as I understand, but I was told I would not be allowed to read or use the computer for at least a week.

I’m not sure if it’s the close focus or the rapid back and forth movement of reading (or a combination of the two) that the doctors thought could be harmful. It made me wonder what effect a lifetime of jerky back and forth eye movement has — could this have contributed to my problem? Has anyone studied how the eyes and brains of literate and nonliterate people differ?

I can’t remember the last time I spent a week without reading. Maybe on some backcountry outing. But in this case I would be surrounded by temptation. Would I go mad? Would I ease into a benign state of Zen-like meditation?

Neither happened. As it turned out, not reading made me very productive. I had to stay home, since reading and computer work is about all I do at my day job. The first morning after the surgery, I picked up the New York Times and pulled out the front page before I caught myself. I stared for a while at the folds in the bed covers, thinking how in the morning light they resembled drapery in Renaissance paintings. That day I was a little restless and scattered.

But soon I found myself waking up and, with nothing to read, immediately getting to work in the garden or on an outbuilding I’m putting in (I did pound my finger a few times, since I had a tendency to close my ailing eye and mess up my depth perception). I would just get up, start working, and work all day until I went to bed.

But I discovered it’s not possible to avoid reading. We live in a world of words. Everywhere I looked I saw them, until they came to seem like the animated playing cards that bedeviled Alice. Try it: just look around wherever you are right now — I’ll bet you see hundreds of words and letters in all different forms.

I did have to allow a bit of close focus. When I tried to calculate whether the foundation for my building was square, I had to resort to a calculator since I found it difficult to figure the square root of 221 in my head. I had to use a tape measure to mark my boards.

And I found that I have become deeply reliant on the internet. How far apart should I place my footings? How much sun does Euphorbia amygdaloides require? What are the chords in the middle part of The Nearness of You? I could just do a search … or, well, I guess not.

So I lost the ability to research the things I was working on. But I also gained a lot of time, since when faced with a decision I just made a choice and moved on. Don’t get me wrong, I’m a big proponent of literacy. But I learned that, like most things, it’s a trade-off. It was good to spend that time without reading; it’s an exercise that I would do again.

But once I got the green light to read again you better believe I was turning pages in no time.

And now I’m blogging. I’m back!