In art and illustration, authors, books 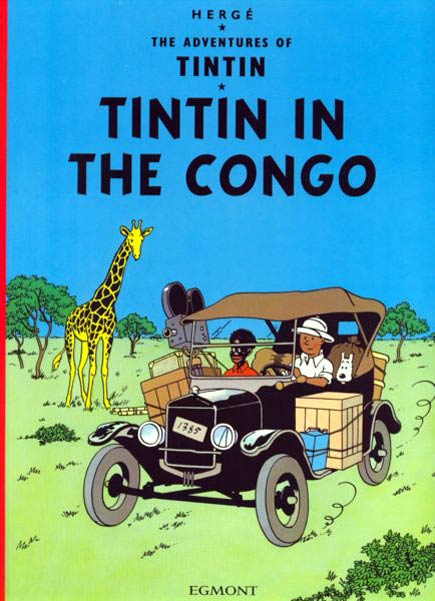 At the Marvel of Manga blog, a discussion came up about Tintin in the Congo and its racist elements. To recap the controversy: The strip was published in 1930-1931, when the Congo was a Belgian territory (Belgium’s colonial behavior in the Congo was particularly brutal). It was republished in 1946 with some of the colonialist elements softened. In 2005 Egmont Publishing issued a new English edition with a foreword situating the book in its historical context. In 2007, human rights lawyer David Enright compained about the book appearing in the Borders chains, and the Commission for Racial Equality labelled the book racist and demanded it be pulled. As a response, Borders removed the book from its children’s section (where it was certainly inappropriate!) and put it in the adult section. In the U.S., however, the book was removed entirely. The controversy was great for the book’s sales, by the way, as it moved up more than four thousand slots to number 5 on the Amazon U.K. list. (This summary relies on — I cringe to confess — Wikipedia.)

A new book from Soft Skull will provide background on this controversy. Tintin began as part of a right-wing Catholic publication called the Petit Vingtième; the publication’s editor kept a signed photograph of Mussolini on his desk. Hergé’s early work was propagandistic (Congo was Tintin’s second adventure), and the work is characterized by Soft Skull as depicting “Africans as good at heart but backwards and lazy, in need of European mastery.” (Soft Skull also notes that “to the exasperation of European liberals, it remains hugely popular in Africa.”)

Soft Skull goes on to observe that “almost as soon as this right-wing tendency gets going it becomes shadowed by a left-wing counter-tendency. In Tintin in America, which he published in book form in 1932, Hergé bitingly satirises capitalist mass-production….” But such criticism of capitalism was not unusual in writers with fascist tendencies, such as Céline (whom I have translated), who writes of a similar visit to the U.S. from a similar perspective. The question is not whether Hergé was right-wing but what to do about a book that is insulting to Africans.

If we were to completely purge our shelves of racism we would eliminate a good percentage of our literary classics. Still, some works strike a more sensitive nerve than others, and this is probably one of them. Has Borders made an appropriate decision? Should the sale of the book be controlled in any way? If so, which method is better, ghettoizing the book (U.K. Borders) or banning it (U.S. Borders)?

There is further discussion at the Elegant Variation.

The impotence of proofreading