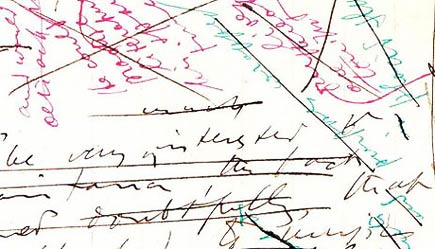 Some book titles feel so much a part of their texts that that the works’ draft titles seem like oddly fitted hats, discarded in the dressing room; others — including some forced on authors by their publishers — read like images aspired to but never quite met. And then there are the flat-out clunkers, to be files under “What were they thinking?”

It might be a curious exercise to gather together some of those discarded titles and parade them back out into the light. I can think of a few to get started, though I know I’m forgetting many.

Shown: detail of Joyce’s manuscript of Ulysses, via Anthony Cummins