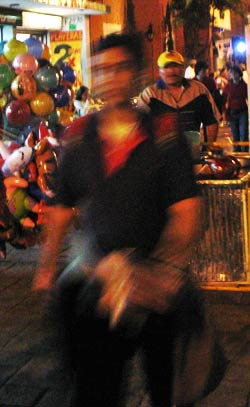 It won’t come as a huge surprise to many people to learn that people are walking 10 percent faster than they were a decade ago. Where have things especially speeded up? Well, in Singapore people are walking 20-30 percent faster than they used to, and Singaporeans count as the world’s fastest walkers, according to a newly released study by Richard Wiseman. (Second-fastest, surprisingly, was Copenhagen. See all the results here.)

A previous study found that “as people move faster they become less likely to help others, and also tend to have higher rates of coronary heart disease.”

(The image is from Merida, and it’s cheating — they don’t walk fast there.)