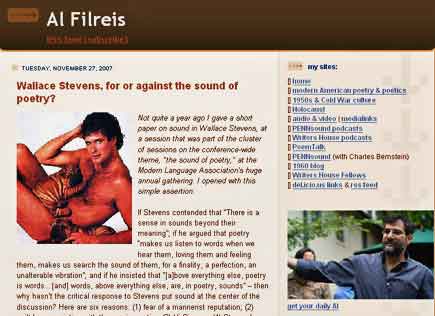 Hot Linking: Process by which one links to an image stored on one site yet it appears on one or more other sites. If done without permission, this is considered unethical since one is using bandwidth they [sic] are not paying for. — 2020 Systems Internet Glossary

Al Filreis is Kelly Professor of English, Faculty Director, the Kelly Writers House, and Director, the Center for Programs in Contemporary Writing at the University of Pennsylvania. Why did his page on Wallace Stevens, shown above, for a time feature a picture of naked David Haselhoff playing with puppies?

It’s not a bold new take on Stevens. Instead, it’s an illustration of the perils of hotlinking. If you link on your blog or website to an image hosted on someone else’s site you lay yourself open to the old switcheroo. Filreis — ignoring issues of copyright and net courtesy — thought he would take a free ride on someone else’s bandwidth. That made him no friends with the host of the copyrighted image of Wallace Stevens, who switched it to one of Hasselhoff.

That possibility alone should be reason enough not to hotlink; there are others as well. If you want to prevent hotlinking you can use set only certain sites to link to your images using cpanel, but I would rather just edit .htaccess, as described around the web in several places, such as the one shown below (click to go to the source). The second procedure shown below describes how you can serve up an alternate image to a particular site without having to rename your image and update your links. 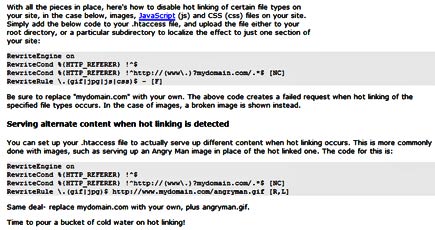