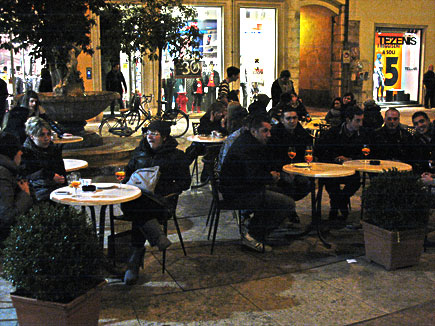 During our recent visit to the Veneto I developed a taste for spritzes, which were being drunk everywhere. When we checked into our vacation rental in Venice our host took us out for spritzes, which was the beginning of the end for me (Carol never got hooked). We spent about a week in Venice and Verona, and then several days in Trento, where I was press checking a book, and everywhere all sorts of people, from ladies in heels to laborers in boots, were knocking down the same bitter, fizzy, rosy concoction. The image above was taken in the central piazza near the Duomo in Trento — you can see about six spritzes on the tables.

The main ingredients in a spritz (pronounced “spriss” in Venice) are white wine, aperol, and bubbly water (“acqua frizzante”). In place of aperol campari can be used, but aperol is the more common ingredient. (I tend to favor campari; aperol is used in the Sir Oliver Skardy video, “Fame un spritz.”) Both Aperol and Campari are amari, which is to say bitter aperitifs that can be drunk on their own, as opposed to “bitters” proper, which are used as flavorings. BevMo, where I picked up a bottle of Aperol (just now being made available in the U.S.) says that its unique flavor and color is acheived [sic] through a subtle blend of bitter orange, gentian, rhubarb and an array of herbs and roots, using a secret recipe that has been unchanged since 1919.”

Although variants abound, the basic recipe is pretty simple:

At least, that’s more or less what I read in the New York Times, which says the drink is catching on in the U.S. The Times advises to garnish the drink with a green olive (“Gently stir all liquid ingredients over ice in a tumbler and add olive”), but all the ones I saw on this visit were garnished with slices of orange (I don’t remember seeing so many spritzes on three previous visits). The Times also says to use prosecco instead of plain white wine, but if you used prosecco it doesn’t seem to me you would particularly need the soda water. The ones I saw made used white wine from the Trentino region. 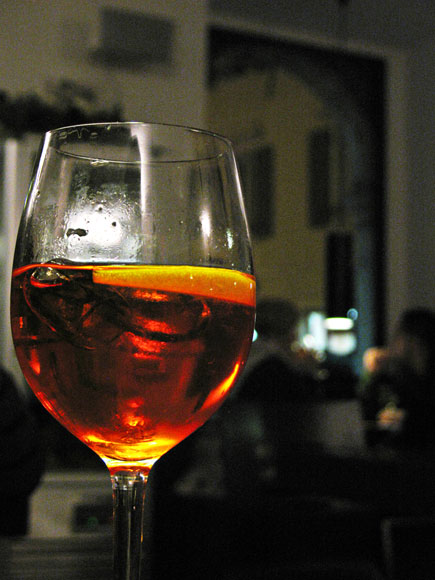 Travel photo: a street in Verona