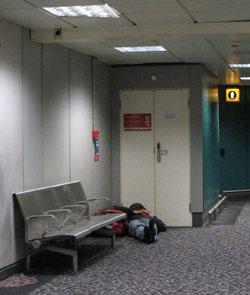 Coming back from Belgium my flight to Heathrow was cancelled because of freezing killer fog. By hiking to the Bruges train station at 3:00 am, I was able to get to Brussels in time to catch a Eurostar train to London. But the Eurostar train was also delayed, and so were all the local London travel options to the airport, so I ended up arriving at Heathrow just a little too late to catch my flight home to San Francisco.

I thought of taking a room at the airport Hilton, but the cheapest room was 363 GBP, which is around $700, and I just couldn’t see it. I could have gone into town and looked for a hotel (not an easy task on the busiest travel day of the holiday season, especially since nearly 200 flights had been cancelled at Heathrow alone), but I was too damned tired. Besides, then I would face the problem of getting back in time for my rebooked flight the next morning.

So I spent a day at Heathrow. Man, they have got to lighten up on the nagging public address anouncements, which repeat incessantly (don’t leave your luggage unattended, don’t leave your car outside the entrance, don’t do this, don’t do that, nyah nyah nyah — the announcers, with their prudish chirping schoolmarmish voices, all sound exactly like Bridgit frigging Jones). 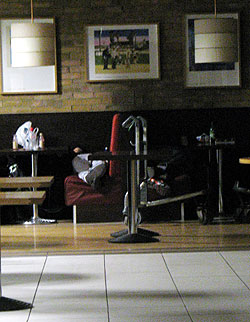 Anyway, over the course of my stay I worked out a few strategies:

1. Get a luggage cart, even if you don’t need it. This is your equivalent of the homeless person’s shopping cart. It will serve as a footrest and a barricade.

2. The promised land is the boarding area, but you can’t get there because you don’t have a pass. Therefore, exit the departures area, which is crowded with hysterical travelers who, like you, have missed their flights, and head for the arrivals area. Here the carpet is slightly thicker and there are a few better nooks to hole up in.

3. One of the best nooks is near the men’s bathroom at the end of the hall (terminal 3), which is protected by a neglected storage closet and some little-used benches. This is where I crashed initially, but the guy shown in the first picture, above, stole my space when I got up for a little hike.

4. But ha! An even better space will open up around 11:00 pm, as shown in the second picture. There is a really bad restaurant in this area that closes at that time. Most of the restaurant is locked up behind a grate after closing, but because of this place’s peculiar geography, there are two booths, each with two approximately six-foot-long leatherlike benches, that will remain outside in the common area. This is where you want to be! Put your bags under the table where they will be safe and stretch out on the luxurious bench.