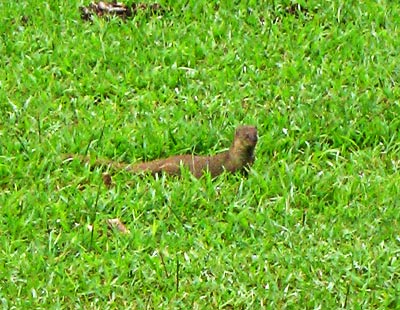 This handsome fellow is an Indian Mongoose (called manakuke in Hawaiian). Seventy-two mongooses were introduced into Hawaii in 1872 in an effort to control rats that had arrived in the islands as a side effect of the sugar cane industry. The rats, like many newcomers to the islands, found Hawaii to their liking, and they began to eat seriously into the profits of the cane magnates. So why not bring in a few mongooses, which are known to eat rats? Well, for one thing, mongooses are diurnal and rats are nocturnal. So while the occasional rat bit the dust, the mongooses didn’t really have much effect on the population as a whole.

A big problem with the introduction of rats on the island is that they eat birds’ eggs, and that has damaged the islands’ unique, diverse, and bountiful but fragile (given new forms of predation) bird population. Unfortunately, the mongooses like eggs even better than they like rats, and eggs don’t fight back. So now the birds’ eggs are literally under attack day and night.

All in all a recipe for things getting out of control, and in our short time here we saw many of these critters (and a few wild pigs as well, another introduced species causing problems).

It was difficult to get a picture, because mongooses don’t like being exposed in the open. They are extremely quick (and clever), and they are usually seen scurrying from the cover of one bush to another.