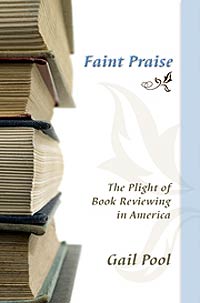 Gail Pool sent me this book because she picked up a quote from Guy Davenport off this website. I once did a fair amount of reviewing — I was a member of the National Book Critics Circle and the Bay Area Book Reviewers Association — but, as I’ve mentioned before, I became disaffected with reviewing, and rarely review in print any more. I suppose I was worn down by the banality and mediocrity of most book reviews (a charge from which I do not necessarily exempt my own contributions).

Does it have to be that way? Gail Pool doesn’t think so, and it’s encouraging to hear that she still believes in reviews, thinks they matter, and imagines that significant industry-wide improvement are possible. I admire her attitude, and I’d like to think she is right. But I can’t fully share her optimism — not, at least, as concerns what she calls “traditional book reviews.”

Pool mainly does two or three things in this book: she details problems with book reviewing today and makes a call to action to help correct them. In the process she also provides an overview of how reviewing works in the U.S., and for some readers this might be the book’s most valuable contribution.

Pool notes that book reviews are routinely criticized for dullness, bias, and inaccuracy — and such criticisms are as old as reviewing itself, which she says began in the late 1700s in the U.S. Though the criticisms are often as laden with private agendas as the reviews themselves, one must wonder whether it is possible to repair an institution that has, by common consensus, been broken for centuries, in fact since its inception.

Pool’s main focus is print reviewing in newspapers and magazines. Such reviews are usually commissioned from a free-lancer by an editor, who selects the books for review from a bombardment of choices dumped on her by publishers’ publicity departments. There are many reasons why the selection process is skewed toward mediocrity: the preference for reviews of well-known authors, the favoritism shown to publishers who take out ads, the marketplace imperatives of the host publication, the pressure of deadlines, and so on. George Orwell perfectly described the result:

A periodical gets its weekly wad of books and sends off a dozen of them to X, the hack reviewer…. To begin with, the chances are that eleven out of the twelve books will fail to rouse in him the faintest spark of interest. They are not more than ordinarily bad, they are merely neutral, lifeless and pointless. If he were not paid to do so he would never read a line of any of them, and in nearly every case the only truthful review he could write would be: “This book inspires in me no thoughts whatever.” But will anyone pay you to write that kind of thing? Obviously not. As a start, therefore, X is in the false position of having to manufacture, say, three hundred words about a book which means nothing to him whatever. Usually he does it by giving a brief resume of the plot (incidentally betraying to the author that he hasn’t read the book) and handing out a few compliments which for all their fulsomeness are about as valuable as the smile of a prostitute (58).

And how was Orwell’s Mr. X selected as the hack reviewer in the first place? There are no special qualifications, no particular training, required to break into reviewing. You just need to be willing to work for little pay and produce the particular flavor of pabulum that the reviewing publication requires — in the U.S. this usually means either some close connection with the topic or a demonstrable ability to craft a flashy lead that will divert the attention of readers as they gulp down their morning coffee. Pool offers a telling contrast between a British review (in the TLS) and a U.S. review (in the NYTBR). (Strangely, Pool identifies neither reviewer by name.) The TLS reviewer begins

Virginia Woolf claimed that there is no such thing as an objective biography. “Positions have been taken, myths have been made.” This is unquestionably the case with Byron…. (89)

while the U.S. reviewer, needing something sexier and punchier, leads with

Lord Byron was the Mick Jagger of his time, “mad, bad, and dangerous to know,” in the words of his tragic admirer Carolyn Lamb….” (89)

To add a little glamor to their publication, review editors may not only review the books of well-known writers but also solicit reviews from them, commissioning a popular novelist to review another novelist’s work, for example. But reviewing and writing fiction are very different things, and the result is often disappointing. Editors may also try to generate a bit of spark by soliciting a review from someone who has an interest in the subject that is so close as to preclude objectivity. (Objectivity is also lost when the reviewer has an agenda of which the editor is unaware, which is often the case.) I think most editors today would (unlike, apparently, Ms. Pool) gladly sacrifice impartiality for buzz. Conflict causes talk, and a catty, dismissive review might do more for circulation than a judicious one. Pool reports that in a survey of its members, the National Book Critics Circle found that 86 percent of respondents saw no problem with having a book reviewed by a “casual acquaintance” of the author; 30 percent would even allow the book to be reviewed by someone cited in its acknowledgments!

To overcome such problems, Pool suggests that the role of the assigning editor must be strengthened and reformed. She thinks the book review editor should be a more visible figure than the shadowy presence who often lurks behind review supplements. She urges reviews to be organized “more coherently,” with books of a similar type grouped together. She thinks the selection of books to be reviewed can be improved by the use of a cadre of critical screeners. She would like to see more reviewers do columns rather than one-offs. She would like more stringent consideration of who should be allowed to review, focusing mainly on critical thinking. She proposes establishing guidelines and codes of ethics for reviewers. She would like to see a relaxation of the publishing schedules of reviews.

This is mostly sensible advice. While I disagree with some particulars, I do agree that if reform is to occur review editors must take the lead. I just wouldn’t hold out much hope. Book reviews occupy an uncomfortable crack between the grinding gears of the publishing industry. Book publishers provide books for review so long as the reviews tend to be favorable and promote sales — or at least engender the word of mouth that leads to sales, which requires reviews to be precisely timed relative to the ever-narrowing window of a book’s shelf life in stores. Book reviews pander on the one hand to publisher advertising and on the other to an increasingly fickle readership, as literacy declines because of cuts in education funding, put through by demagogues who depend for power on the support of an ignorant electorate unable even to identify its own self-interest. When the majority of Americans fail to read even a single book in a year, the prospects of a healthy book review segment in the mainstream media will be dim regardless of the review editor’s best efforts.

Nonetheless, Pool continues to place her faith in the traditional review. “The traditional review,” she claims, “is the only kind of ‘coverage’ that focuses exclusively on the text and that is — or at least aims to be — written by a disinterested and qualified critic.” Pool devotes a fair amount of space to on-line reviewing but does not, in my judgment, fully appreciate its potential. Instead, she focuses primarily on reader reviews on sites such as amazon (which for all their flaws I find sometimes helpful), and of course has no trouble highlighting their staggering weaknesses. But I think there is reason to place our hope for reviewing more in the internet than in print (to generalize broadly, since there are heroic efforts in print as well). With respect to reach, on-line numbers are much bigger than print numbers, and the connection between reviewers and readers is more readily customized on-line.

Rather than looking at amazon, I would look at something like Ron Silliman’s blog. Ron is able to review far more poetry there than he would be likely to cover in print. While his reviews are opinionated and even contentious, it does not take too long to get a general sense of where he’s coming from. I happen not particularly to share his aesthetic, but I know I can rely on him to cover his topics with consistency and fairness within the parameters he has established. I would place a larger share of my hope in these sorts of voices than in the prospect of mainstream reviewing rising from the muck.

That doesn’t mean I want to see such reviewing fail. I would welcome reviewing that is inspirited with soul and focus (and that helped to sell books, or at least get them talked about and, ideally, read). I wish Ms. Pool all the best in getting her reforms adopted. I will be referring back to this earnest and informed book from time to time, and I recommend it as an introduction to mainstream book reviewing in America.

UPDATE: A new review of this book has appeared, on Jerome Weeks’s Bookdaddy.

Monolingualism and the Presidency