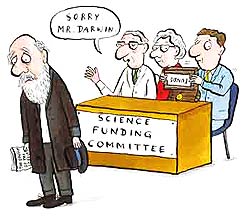 Here’s a weird mash-up of book marketing, acquisitions, and social media. A group called Media Predict is soliciting book proposals from authors and agents (I’m not sure what sort of agent would participate in this). The proposals are posted on the site. “Traders” from the general public are given $5000 in fantasy money to invest in the books based on the posted summaries.

The books that do best in the competition will be short-listed for review by a group of editors for the grand prize, which includes publication of Simon and Schuster’s Touchstone Books, “so long as the completed manuscript satisfies Touchstoneâ€™s publishing criteria.”

It seems like an awfully difficult way to get a book published. If the project is successful, it will presumably amount to further a further reduction in the influence of editors, in favor of the collective wisdom that has produced such wonderful performers via American Idol — although clearly Touchstone Books wanted to retain ultimate editorial control despite whatever incentive Media Predict obtained their participation with.

â€œMedia Predict and Project Publish is an intriguing new way to evaluate content for publication,â€ said Mark Gompertz, Executive Vice President and Publisher of Touchstone Fireside. â€œIt is the ultimate pre-publication, market-based focus group. I look forward to following the market closely once trading gets underway and using their lead to invest in a project for publication by Touchstone.â€

New York Times: Publisher to Let the Public Have a Vote on Book Projects

The cartoon image is from Resurgence: “Democratising Science”

Book Reviews in Blogs and Newspapers