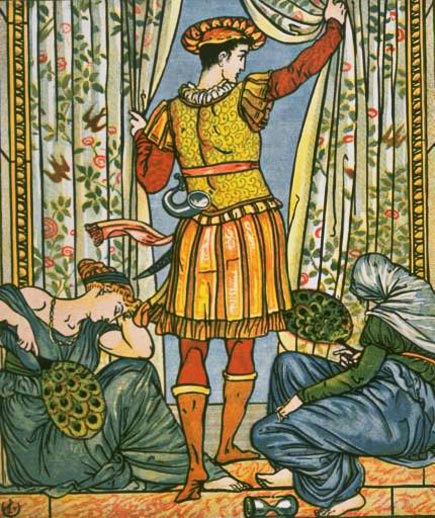 In a distant kingdom long ago a prince was born. He grew up quickly, as children do, and soon the king and queen assembled the most talented people from throughout the realm to tutor the boy in all the arts and sciences. In time he became a man who was not just tall and handsome but also learned and cultured.

His father, the king, was a stern but forward-thinking ruler who encouraged the development of new technologies, and it resulted that his metal workers developed a new method of tempering steel blades that gave him a military advantage over neighboring kingdoms. Unfortunately for those kingdoms, the king was also a ruthless and fearsome man, who launched a campaign of conquest that saw him defeat his every opponent. His empire spread throughout the known world, and so he called himself no longer simply the king but the first emperor of what would become a great and powerful dynasty.

When the emperor would conquer a city he would instruct his generals to emblazon his mark on its walls and ramparts and all its important buildings. Because his empire had been built by the sword, his mark depicted a black boot holding down a howling head while a bloody blade sliced its neck. The emperor’s cruelty was legendary, and whenever the people saw his mark they recalled his terrors, and they trembled in fear.

The people endured decades of the emperor’s harsh rule, but in time he grew old and passed away, and the prince ascended the throne as the dynasty’s second emperor. To mark his ascension he toured his realm in a fine carriage marked with the empire’s fearsome logo. As before, when the people saw that frightening symbol and knew that the emperor was approaching they would flee and cower.

This disturbed the young emperor, who knew that he was handsome and cultured above all others, and who longed not just to be feared but also to be loved and admired. He assembled his ministers and asked them to propose a solution. They recommended that the emperor remove his father’s mark everywhere it appeared throughout the empire and replace it with a new one that would better express the new emperor’s vision.

A few dissented that such a program would be extremely expensive, and some questioned its effectiveness. But the emperor’s magicians assured him that if his artisans and ministers could get the new mark exactly right, all of the empire’s problems would be solved and the emperor and his subjects would surely live happily ever after.

Artists and philosophers from every corner of the land gathered in the capital and submitted their proposals. One of these appealed to the young emperor above all the rest. It depicted a pair of throbbing hearts, representing the love of the emperor for his subjects and their love for him.

“This is the mark, I choose,” he enthused, but before making a final decision he asked his inner circle of ministers their opinions. “It looks like a pair of twisted radishes,” some of them thought. “If we changed our policies,” thought others, “it would do more good than changing our symbol.” But everyone was afraid to contradict the emperor, and the decision was finalized to replace the old mark with this new one.

Throughout the empire the former mark was removed and the new one installed. The side panel of the emperor’s carriage was replaced with one bearing the new symbol, and the beaming young royal began a new tour of his realm. But when the people saw the carriage and knew that the emperor was approaching they would flee and cower, just as before. This disturbed the young emperor, but his ministers, disguising their worries, assured him that new brands simply take time to be effective.

Now, it so happened that in a country hovel another boy had been born on the very same day as the prince. What’s more, this boy resembled the prince strongly. The boy’s mother had been a great beauty, and some of their neighbors recalled how charmingly she had curtsied to the emperor when he had visited the area on a hunting excursion the same year his son was born.

That boy too grew tall and handsome. But he was anything but learned and cultured; in fact, he was illiterate and naive. But he a good lad, and even, in his own little part of the world, a famous one, for he was known for always telling the truth — in his entire life he had never even hinted at the slightest prevarication. As a result, people called him The Fool.

In time the emperor’s tour brought him to the fool’s hut, where he and his mother and his seventeen siblings eked out a hardscrabble existence raising radishes and other root crops. As the emperor’s carriage drew near, the fool pointed at the logo on its side panel and cried out, “Look! The emperor’s carriage is marked with a couple of twisted radishes, just like the ones we grow!”

At this the emperor flew into a rage. “It is not a picture of radishes!” he exclaimed. “It depicts entwined hearts, representing my love for my subjects and their love for me!” In his fury he ordered the farm to be burnt to the ground and the fool and his entire family to be buried up to their chins to slowly and painfully expire beneath the same blazing sun that had stunted their crops and kept them empoverished for so many years.

Then the emperor continued on his tour, his carriage still proudly bearing his new double heart symbol. And whenever the people saw his mark they recalled his terrors, and they trembled in fear.

Image: the prince from “Sleeping Beauty,” by Walter Crane