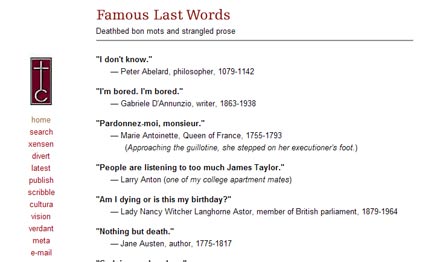 I should finish up the press check I’m on tomorrow and have Thursday free, or maybe I’ll just proof the cover on Thursday morning. God, I hope so. I’m about to go mad trapped in this industrial park just, frustratingly, outside the lovely city of Bruges.

But those aren’t the “famous last words” I meant by the post title. I was referring to my web page of that name, which made StumpleUpon‘s “buzz” page, bringing a bunch of visitors. So this is a place where people can leave suggestions for more “deathbed bon mots and strangled prose,” or make comments Ã son gout.

Lately 75 percent of my non-search engine traffic has been coming from StumbleUpon. I’m not sure what to make of that, other than to say thanks to the stumblers who have bookmarked my pages.