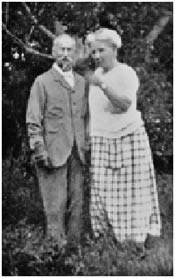 Most posts at Right Reading are published at 5:00 am Pacific Time. But this one will run at 11:59 the night before. I wouldn’t want to be a day late in wishing the punctilious Henry Fowler a happy 150th.

Fowler is, of course, the author of Modern English Usage, which is still among the best editor’s reads. These days, the linguists will tell you that to be prescriptive is small-minded, and the enlightened and sophisticated attitude is to just be descriptive. After all, language is always evolving, and prescription tries to stop it in its tracks, which is unnatural. It’s like building a wall of sand to hold back the tide.

Prescription also has the taint of Latinate grammar going against it. Latin-based grammar was an attempt to rationalize language — which has a rationality, certainly, but a deep, fuzzy, fractile logic, full of exceptions and anomalies, and not the tidy package tied with a bow of the grammarians.

But of the rationalists, Fowler was flat-out the best. Once you have learned his distinction between which and that, you just can’t help but wince at “wrong” whiches, which seem at once ignorant and pretentious. Fowler’s distinction was not really one that existed in the English of his time, or not in any systematic way that was observed by very many writers. But it was so persuasive that generations of copy editors have enforced it on the language, and critical interpretations of legal texts may sometimes hang on it.

In a nutshell, Fowler said that the word that introduced restrictive clauses, and the word which signaled nonrestrictive ones (usually which clauses take a comma and that clauses do not):

Why shouldn’t English be able to make that distinction?

Happy century and a half, Mr Fowler!