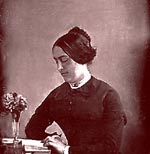 Kevin Larson (Microsoft) and Rosalind Picard (MIT) have published a paper called “The Aesthetics of Reading” (pdf link) that attempts to determine whether typographic refinements result in improved reading. In the authors’ words:

Theorizing that designers and typographers must know something, the authors attempted to find new ways of measuring the effects of typography and design. They came up with two measurements: time perception or “relative subjective duration” (RSD — this assumes that a more pleasurable experience will have less of a tendency to seem to drag on) and positive mood (based on studies that have shown that positive mood improves cognitive performance).

We have … demonstrated that high quality typography appears to induce a positive mood, similar to earlier mood inducers such as a small gift or watching a humorous video. This is an exciting finding because there are important differences between good and poor typography that appear to have little effect on common performance measures such as reading speed and comprehension. To help move the field of typography forward we need methods that can successfully measure aesthetic differences.

Update: Kevlar at typophile.com reports “We describe further progress on this line of research in issue 22 of Typo magazine.”