Insert tab A into slot B 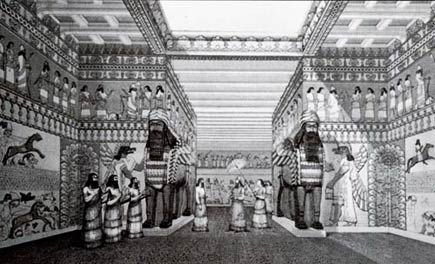 How did the order of letters in the Western alphabet get so firmly established that there are more similarities than differences between such languages as Latin (a, b, c), Greek (alpha, beta, gamma), Arabic (alif, b?’, t?), Hebrew (aleph, bet, gimel), and so on? As Jonathan Hoefler at Hoefler & Frere-Jones observes, the order can be traced back 3,500 years to the Ugaritic alpa, beta, gamla.

Part of the answer might lie in the use of letters to indicate the assembly of parts in construction projects. Witness this passage, which Hoefler came across in Peter T. Daniels and William Bright, eds., The World’s Writing Systems, Oxford University Press, 1996

Ancient Near Easterners used fitters’ marks, single letters of the alphabet apparently used to indicate the order in which various building materials are to be assembled. Various decorative ivory pieces from Nimrud, Iraq, were letter-coded to show the order in which they were to be inserted into furniture. In a temple at Petra, Jordan, archaeologists found “large, individually letter-coded, ashlar blocks spread along the floor of [a] room … in the temple structure.” In a 1971 salvage expedition of a ship downed off Marsala, Italy, Honor Frost discovered “letters at key places where wood was to be joined … the ship assembly [was thus] a colossal game of carpentry by letters, like a modern paint-by-numbers project.”

Shown: Artist’s reconstruction of the palace at Nimrud