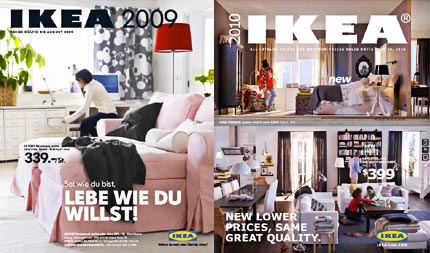 Well, true, it doesn’t look as good, so why are they making the change? I think it’s because people under a certain age find Verdana comfortable and familiar because they see it all the time on their computer monitors. So it might feel friendlier to the children of the computer age than a stick-and-ball face from the 1920s.

It’s also possible that in the long run Ikea is intending to phase out its print catalogue and go online only. A big virtue of Verdana online is that it resides on practically everyone’s computer, so you don’t have to worry about font substitutions.

My guess is that few people outside the type world will notice or care about the change. How do you feel about it?