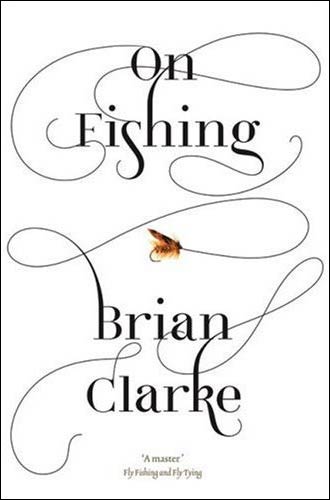 On Fishing is a good example of a mostly typographic cover that is distinctive, noticeable, and instantly conveys a sense of the book. The graceful loops of the swashes express something of the freedom and exhilaration of a good fly cast, while the title is forceful and remains readable from a distance.

Perhaps the upright modernist font — which probably began as a form of Bodoni — with its perfectly vertical axis, suggests something of a fisherperson standing steady amid rushing water, as the loops of the castline swirl around.

From a typographer’s point of view, however, the design leaves something to be desired. The hooklike extensions of the s and k are clever, and well enough done, but the connections between the swashes and the letter forms are rather clumsy. The B in particular is quite ugly, and the angle of the swash off the O is at least questionable. The way in which the swash connects is inconsistent: it gets quite thick where it attaches to the B, but it seems not thick enough where it attaches to the O and C.

All in all, a clever design that will probably appeal to all but the most curmudgeonly typophile.

There is some discussion on this cover here.

Online bookseller links for this title: