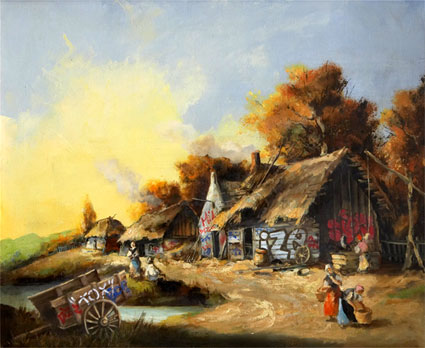 Banksy began as a graffiti artist. Much of his early work was stencil-based because that allowed him to complete his projects faster. But in recent years he’s moved on to subverting traditional art by adding modern, often pointed, humorous, and satirical elements to familiar paintings by Monet, Hopper, and others.

Christina Aguilera is the proud owner of a Banksy, described by the Independent as “a pornographic picture of Queen Victoria in a lesbian pose with a prostitute,” for which the pop star paid 25,000 GBP (currently about US $49,000).

But now you can own a Banksy for free. In response to the pirating of his art, Banksy is making high-resolution images of his work freely available on his website. Enjoy.