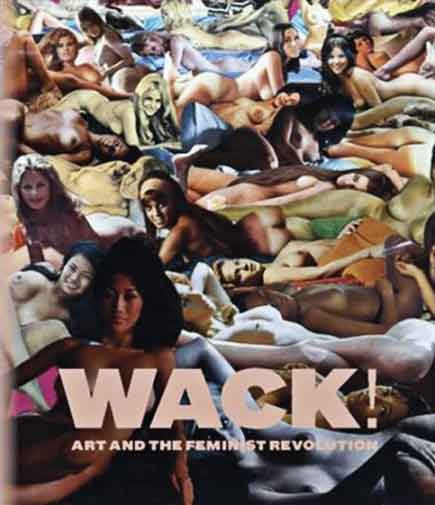 I missed the discussion about this book cover during the accompanying exhibition at the Museum of Contemporary Art, Los Angeles, last summer. Clearly the provocative cover image of the catalogue is intended to cause the viewer to consider the nature of feminism and feminist art.

According to the museum website, “the artists in WACK! made feminism one of the most important influences on art of the late twentieth century”:

In the 1970s, women changed the way art was made and talked about forever. WACK! Art and the Feminist Revolution is a long-awaited international survey that chronicles the impact of the feminist revolution on art made between 1965 and 1980, featuring groundbreaking works by artists such as Chantal Akerman, Lynda Benglis, Theresa Hak Kyung Cha, Valie Export, Mary Heilman, Sanja Ivekovic, Ana Mendieta, and Annette Messager, who came of age during that period — as well as others such as Louise Bourgeois, Judy Chicago, Sheila Levrant de Bretteville, Lucy Lippard, Alice Neel, and Yoko Ono, whose careers were well established.

A lively discussion on the MOCA page, focusing on the cover art, begins with these comments:

Sarah Rossiter: “The front cover unfortunately caters to the power structures that Feminism has sought to combat.”

Paige Wery: “I think Sarah Rossiter misses the point. The cover of this catalog is empowering.”

The cover art is Body Beautiful, Beauty Knows No Pain: Hot House, or Harem, 1966-1972, by Martha Rosler. Here is an excerpt from the catalogue about the series of which this painting is a part:

In one series of thirty-one works, Body Beautiful, or Beauty Knows No Pain, Rosler interrupted magazine advertisements by collaging them with elements that call attention to the ubiquitous use of women’s bodies and body parts in the media to market consumer goods.