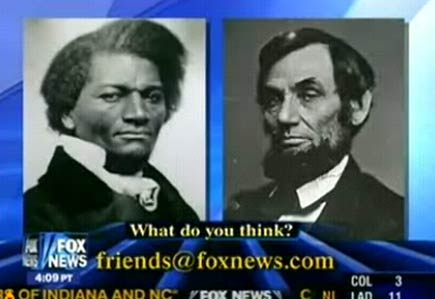 I guess they thought she said “Lincoln-Douglass.”

What a debate that must have been!

El Blogador at Inner Diablog (whose interesting posts I often consult in the context of my Buried Mirror research) cites Samuel Pepys and Jean Baudrillard as models for bloggish prose. These writers, he says, “pointed towards to a new style of writing that consciously moves out towards the edge of discussion (or the long tail if you must) often adopting “controlled chaos” as the chosen idiom.” An excerpt:

In terms of both style and content, mainstream journalists and academics tend to be repelled by ‘edgy’ writing like this because they have been trained to move towards and assume control of the centre of the topic they are addressing.

Similarly, many people in the PR industry are perhaps more naturally inclined to the mass market side of communications rather than the long tail. They’d rather be a hub than a node, which is why as a group they tend to waste so much time on Facebook and why, in spite of an apparent knack for the construction of narratives, they have thus far met with mixed success in the new medium.

It’s a highly competitive workplace and the bestseller mentality, wanting to be one, and to work with others in that same category, may be preventing PRs from fully grasping the transformations in their industry.

Print journalists criticizing bloggers is nothing new. So when Michael Skube, a journalism professor at Elon University, wrote an opinion piece for the Los Angeles Times, in which he asserted that bloggers do no real reporting, it was difficult to suppress a yawn.

To bolster its argument — or to give it the appearance of specificity — Skube’s article mentioned four blogs by name. One of those was Talking Point Memo. TPM found that odd and sent Skube an e-mail, to which he responded

I didn’t put your name into the piece and haven’t spent any time on your site. So to that extent I’m happy to give you benefit of the doubt …

Gosh that’s generous! To that extent! The benefit of the doubt!

TPM followed up, pointing out that his article — which had appeared that very day — had in fact mentioned the site by name. And got another response:

I said I did not refer to you in the original. Your name was inserted late by an editor who perhaps thought I needed to cite more examples.

In short, the esteemed journalism professor, in an article criticizing online reporting, allowed an opinion to go to print under his byline about a subject he never researched and admits knowing nothing about.

There is just so much still to learn from print journalists.