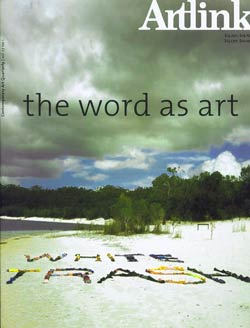 The latest issue of Artlink (a contemporary art quarterly published in ) caught my attention with a series of articles devoted to “the word as art.” Of course there is a long tradition of using letters and calligraphy as the basis of artwork. Traditional arts from , East Asia, and the Maya world are particularly noteworthy in this respect. But the range of text art seems to have increased recently.

Inside Out, a show of contemporary art from China that in San Francisco was jointly hosted by SF MOMA and the Asian Art Museum in 1999 (curated by Gao Minglu of Harvard in association with Colin Mackenzie of the Asia Society and Elise Haas of SF MOMA) included several excellent examples, such as Xu Bing’s remarkable Book from the Sky, a work composed of thousands of made-up characters, and Wenda Gu’s United Nations Series: Temple of Heaven (China Monument), a work made up of human hair. 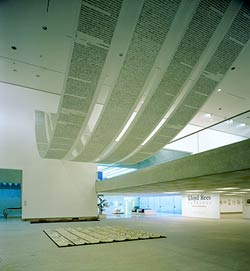 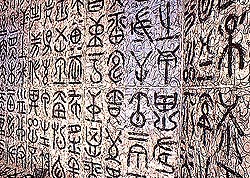 After the break: brief summaries of the Artlink text/art-icles (and a quotation from each).

I will not attempt a review of the articles but just try to give a sense of the contents of the magazine.

Citing such figures as Mallarmé, Duchamp, and Olson, Tipping calls for an integrativc approach to word arts that draws on both literary and visual arts.

Quote: “As someone who maintains a literary practice and takes poetry to heart, I wanted to emphasize artists who are dealing with language as an entity with its own transformative powers, rather than as a surface (even if active, and negotiated) upon which to draw. Some artists using words don’t love them as a core material, but use the unsettling effect of words to invigorate an uncertain picture with ambiguity, or to give a political slant to abstraction. Others – especially some graphic designers who don’t seem to read but simply cut and paste – treat texts as so much decorative texture….”

2. Jane Goodall, “The Virus and the Oracle”

Beginning with William Burrough’s dictum that “the word is now a virus,” Goodall survey some examples of language insistently insinuating itself in contemporary art, and she traces the impulse back to the figure of the sphinx.

Quote: “There are signs that the elegiac, the enigmatic and the penitent are making a comeback in the art world, together with the cognizance that to live under the sign of understanding is both a moment and a marathon.”

3. Anne Kirker, “Fluxus and After”

Kirker rehashes the history of the Fluxus movement and connects it to the work of such Australian artists as Michael Phillips, Madonna Staunton, Alex Selenitsch, Richard Tippling, and Lucas Ihlein.

Quote: “Fluxists go where the interesting problems are….”

Morrell discusses the use of text as a subversive in artworks by indigenous Australians, among them Richard Bell, whose Bell’s Theorem (2002) featured the words “Aboriginal art — it’s a white thing.” Fiona Foley’s Signpost II (2006) is the magazine’s cover image.

5. Peter Hill, “Playing with Art and Language: Some Personal Memories”

Hill recalls the London-based artists Bruce McLean and Ian Breakwell and then considers two artists who play with anagrams and palindromes, Peter Burgess and Ed Ruscha, and two artists who emerged from the world of publishing, Barbara Kruger and Jenny Holzer.

Quote: “I’ve always felt that art movements are at the most exciting before they are named, and certainly well before they become institutionalized and academicized.”

Quote: “Artists’ books, due to their unconventional architecture, utilize typographic interventions on the page as a way to help create an experiential and haptic reading.”

Quote: “In these word works, slippery as eels, there is something to be gained from becoming aware of what we don’t know and can’t understand.”

The author seems to be attempting to view the word as an object divorced from its syntactic environment. It’s not clear that he has a good grasp of what a word is (pdf link). He would also benefit, IMO, from more substantial knowledge of the history of typography. I can’t agree with assertions such as this one:

Quote: “The alphabet is a 26-item suite of forms, all recognizable and with hardly any individual histories and associations.”

Rankin considers artists who transgress the “sacred” physicality of the book through techniques of mutilation, effacement, and the like. Artists reviewed inclue Tom Phillips, Simryn Gill, Ken Orchard, Gerard Genete, and Alex Selenitsch.

Quote: “For these artists the slicing, tearing, and unpicking of books is not an act of violence or irreverence. In subverting the original narrative to their own puprpose, they dance with the ghosts of the books, the reconsecration of the text into artworks creating contemporary objects of veneration and desire.”

Stuart discusses two artists, Franz Ehmann and Peter Lyssiotis, who play with the physical arrangement of texts and the viewer’s engagement with them.

Quote: “If the conceptual parameters of text-based art do not expand to incorporate these aspects of reading practices, we limit the sort of writing that can be exhibited to the glib statements, ironic appropriations and intellectual kitsch that currently pervade the genre.”

Thomas views Islamic calligraphy, as evidenced in the work of Hossein Valamanesh and Naeem Rana, as a contextualizing and politicizing element in text arts.

Quote: “A character’s interpretation depends as much on its abstract form, its beauty and its sacred significance as on its literal meaning.”

Newmark reviews two issues of Visible Language, edited by Ken Friedman and Owen Smith: vol 39 no 3, Fluxus and Legacy, and vol 40 no 1, Fluxus after Fluxus.

Quote: “These two volumes offer a wonderful compilation of articles, attending to still very relevant issues to do with internedia, visible language play, and performance.”

Tipping briefly discuses writing at the edge of legibility, citing Asemic magazine and the website typeisart.

Quote: “Poetry, like drawing can stretch out towards ‘a point where language fails’ as Pat Hoffie put it in a recent email, becoming expressive rather than semantic (that is, representational illustrative or descriptive) and feeling-filled like music which plays to our whole being.”

Crawford discusses a project of Guan Wei, who, inspired by aboriginal art of Gunbalanya, melded aspects of that art with Chinese characters to create a sort of alphabet of aboriginal pictorial narration.

Quote: “Sitting high above the township of Injalak in Gunbalanya, Western Arhem Land, the Creation Mother Yingana has, for time immemorial, clutched his invaluable dilly bags. These woven bags, depicted on the rock face of the escarpment, contain some precious items. They contain language.”

5. Noreen Grahame, “The Book, the Poet, the Artists and the Breakthrough”

Grahame places Solomon, a 1995 book artwork in seven volumes by Ian Davis, in the post-Mallarméan tradition of attempts to disrupt the linearity of written language.

Quote:
antipodean atlas
gravity is a heavy condition
ideas can be heavy
the world is heavy
but can be lifted
quite easily

16. Sarah Tutton, “Emily Floyd Against Herself”

Emily Floyd creates monumental letters out of wood, making up fragments from novels and essays.

Quote: “Every word, every expression, is simultaneously empty and over-laden with image.

Tipping traces works by several artists incorporating sky writing. One example: when Prime Minister John Howard refused to apologize for historical abuse of aboriginal people, a march was held, and during the march the word sorry appeared in the sky.