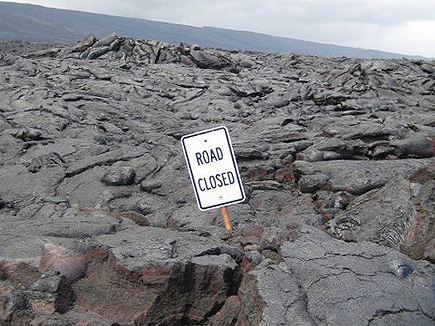 People who skip the sports section miss some extraordinary writing.

Advancing to the Western Conference finals, a championship team will step up its game. And the San Francisco Chronicle sportswriting team did not disappoint. Today’s Sporting Green is an astonishing mix of strained conceits, purple patches, and semi-literate clichés. Let’s focus on the conceits. Here are our awards.

This award has to go to Bruce Jenkins, who writes:

Cruising a straight-line highway with another NBA championship in mind, the Warriors always knew there would be an intersection when the playoffs arrived. The signpost would read SAN ANTONIO, and everyone around the league was in on the secret. ¶ Well, it seems there’s a maintenance crew about ready to change the lettering ….

A highway sign that everyone knows about but is nonetheless a secret, which a maintenance crew is preparing to reletter. Riiiiggght. (What he means is “The Warriors expected to play the Spurs but they might play the Thunder instead.”)

A trumped-up story many writers got mileage from (on Bruce Jenkins’s straight-line highway?) was Dubs forward Draymond Green saying before the game that Portland was done in the series. It inspired Rusty Simmons to write this:

If their teammate was publicly going to out on a limb [sic] like that, they had to reinforce the tree.

Good thing a maintenance crew is already on the scene!

Scott Ostler’s conceit is not in the same category as these. It’s too good not to quote. He writes that last year’s Warriors team

were like kids on their first trip to Disneyland. This season they’re Mickey Mouse, taking a break behind the castle, removing his head to have a smoke before wading back out there to wave and thrill the kiddies.

Nifty shift from plural to singular there.

So there you have it. All of these guys must have read Raymond Chandler at an impressionable age.

I’ll resist the urge to introduce additional categories, such as the “BIG SAVINGS FROM LAYING OFF THE COPY EDITORS AWARD.” That’s a dull category in which there is competition every day. Today it could go to Simmons for writing “to out” instead of “to go out,” but I would give it instead to Ann Killion for “ Portland grew it’s lead to double digits.”

For more examples, from “he ain’t no one-engine pony” to “his ceiling is through the roof” to “I have to put my head to the grindstone and keep grinding” to “I’m going to turn this team around 360 degrees,” visit my Away with Words.