In art and illustration, asian.culture, webwork 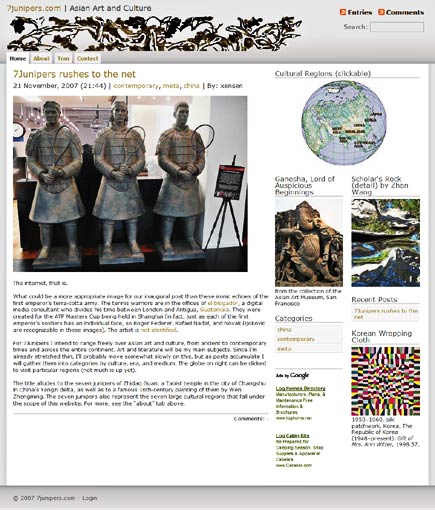 It’s premature to announce this but I’m impatient so I’ll go ahead and do it anyway. The empire is expanding with another website/blog. It’s www.7junipers.com, and it will be my place for comment on Asian art and culture.

The title alludes to the seven junipers of Zhidao Guan, a Taoist temple in the city of Changshu in China’s Yangzi delta, as well as to a famous 16th-century painting of them by Wen Zhengming. The junipers, which apparently still stand on the site, were planted in the year 500. For more on the significance of the seven junipers, see the site’s “about” page.

Some of my Asian material is among the most popular on this website, including pages on Taoism, Chinese jades, and the Daode jing, for example. I confess I do hesitate a bit to move pages that are drawing a lot of traffic, so I might proceed cautiously — but sooner or later I expect to move all of this material over to 7 junipers.