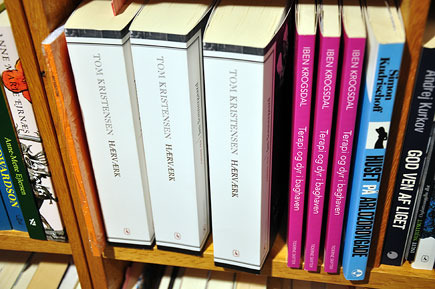 Maybonne returned recently from a trip to Europe, which included a swing through northern Germany and Denmark. While there she took a few pictures of Christensen-related books and signage, including this shelf featuring the best-known title of Tom Kristensen (1893-1974).

I’ve long had some interest in Kristensen, and not just because of the similarity of our names. I first encountered him in Richard Ellman’s biography of James Joyce. (Apparently Ellman got some of his facts wrong about Joyce and Kristensen, who did a review of the bio.) Kristensen’s book Haervaerk (“Havoc,” shown in the photo) was influenced by Joyce and introduced some of his literary strategies to Denmark. The two men met, and Joyce was interested in Kristensen’s work, which centered around the city of Copenhagen much as Joyce’s centered around Dublin. Haervaerk, which was published in 1930 traces a journalist’s intentional journey of self-ruination.  The book was translated into English by Carl Malmberg as Havoc and published by the University of Wisconsin Press.

There is a good brief appreciation of Haervaerk by Marie (who has a master’s degree in Comparative Literature and Theatre Studies, and is employed as a dramaturge at a chamber opera house in Copenhagen) at the blog “At the Lighthouse.”