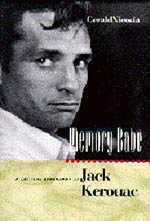 Gerald Nicosia asserts that Viking Penguin and the estate of Jack Kerouac are “deliberately removing my name from books on the Beat generation and Jack Kerouac.” The Kerouac estate was passed to his third wife, but Nicosia had supported a failed claim to the estate by the author’s daughter, who argued that the will in question was forged. Nicosia also criticized the estate for selling off portions of Kerouac’s archives, such as the original On the Road typewriter scroll, which was sold for $2.4 million.

The truth of the matter appears difficult to establish, but it does appear someone is lying. According to Nicosia, John Leland, author of Why Kerouac Matters, confessed to him in a phone call that Penguin editor Paul Slovak pressured him to remove or change citations to Nicosia. But Leland says that “No one at Viking Penguin ever asked me to remove his name,” Leland said. “I told Nicosia that there were several citations to his book in Why Kerouac Matters. There is one in the text and one in the bibliographical essay. That’s all there ever was.”

The fiftieth anniversary of On the Road‘s original publication will occur September 5.

Information in this post is via an article by Heidi Benson in the San Francisco Chronicle.

Who are these people?