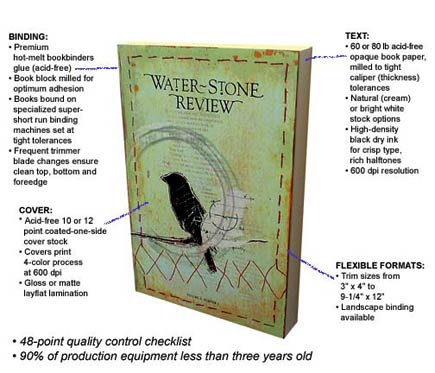 If you are quixotic enough to wish to engage in literary book publishing, you might want to take a look at the sales figures for the Man Booker Prize finalists:

Throw out the anomalous McEwan sales, and the five other Booker Prize finalists averaged total sales of 793 copies. That number would not normally increase hugely, because most books have only about a six- or eight-week window in which they are actively sold in stores. But, for the sake of argument, let’s say their sales will about double, and average 1500 units.

Now let’s do some calculations from the publisher’s point of view. (I’ll be making some arbitrary assumptions for the purpose of illustration.) Those books might be priced around $25 each. But they are offered to bookstores at a substantial discount (we’ll say this is a traditional house for which most sales are through stores). The discount might average around 45%, so let’s see what we have so far: 1500 books x $25 retail price x .55 discount = $20,627 total. If you’re an independent publisher, your distributor will take a quarter or more of that figure (if you’re large enough to have your own distribution operation you’ll still pay something like that in internal expenses), so we’ll multiply by .75, which gives us $15,469.

The Booker finalists range in length from 168 pages (McEwan) to 840 pages (Barker), so the cost of printing will vary greatly. With traditional printing you almost have to print 3000 copies, because such a large percentage of print costs is setup (otherwise you would have to raise the $25 retail price considerably). You’re probably looking at more than $15K in print costs (compared to the $15,469 in income as calculated above). Okay, you’ve got within shouting distance of breaking even, right?

Wrong. Some of the other things you have to pay for include:

I ask you: is this a viable economic model? In ancient times — say, the first half of the 20th c.– houses such as Knopf were controlled by editors who felt a cultural responsibility to publish uncommercial works such as poetry and translations (McEwan might pay for Hamid, Jones, Enright, Barker, and Sinha, for example). I used to work with an editor who said he felt he knew everyone in the country who purchased poetry books personally — a small exaggeration that makes a point. Publishers covered the losses from these titles with income from profitable books. Sometime around mid century, and accelerating thereafter, the editors began to lose control of the publishing houses, which became controlled by finance people, and the unprofitable titles were largely let go.

Print on demand could offer some relief from the calculations described above. If the books can be expected to sell in the 1500-unit range, why print 3000? Now, I have used the term “print on demand” because it’s the one most people are familiar with, but a distinction should be made between print on demand proper, in which books are printed to fulfill sales as order come in, and short run printing (which is what I am mainly interested in). Short run printing uses the same digital printing technology as POD, but the publisher prints some quantity of books — 500, 1000, or 1500 perhaps — up front. This provides stock for promotion and marketing, and enables some penetration into the store market. It approaches a more traditional publishing model, but relieves the financial burden a bit on the often small and independent press — who don’t have the advantages of scale in printing or control of vehicles of promotion and distribution that large corporate publishers enjoy — that have largely taken up the torch of publishing limited-sales literary titles, such as five of the six Booker finalists.

The new generation of digital printers — companies like BookMobile, whose graphic is shown — are said to produce a good-quality product. I think this is an approach that is likely to grow in popularity and benefit both independent publishers and the larger literary community. I might even give it a try myself one of these days. (Yes, I just might be that dumb.)

Does anyone have thoughts or experiences about digital short run printing to share?