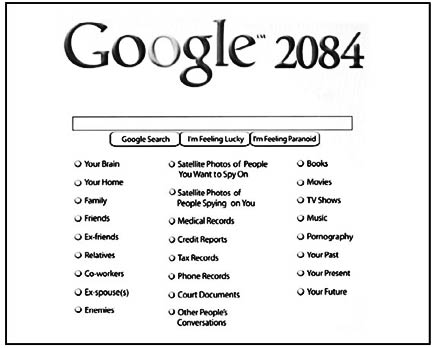 A few months ago, scholars from the University of Graz in Austria released a 187-page pdf document, entitled Report on dangers and opportunities posed by large search engines, particularly Google. (The file is large, so I recommend downloading and opening it from your hard disk rather than trying to access it through a browser.) The authors’ goal is to examine the implications of “the monopolistic behaviour of Google.” They assert that “Google’s open aim is to know everything there is to know on Earth. It cannot be tolerated that a private company has that much power: it can extort, control, and dominate the world at will.”

While the writing is a bit clunky, the report is interesting not only for its content but as an expression of a concern that seems stronger in Europe than in the U.S. Following is the report’s overview of its contents:

1. To concentrate on Google as virtual monopoly, and Google’s reported support of Wikipedia. To find experimental evidence of this support or show that the reports are not more than rumours.
2. To address the copy-past syndrome with socio-cultural consequences associated with it.
3. To deal with plagiarism and IPR violations as two intertwined topics: how they affect various players (teachers and pupils in school; academia; corporations; governmental studies, etc.). To establish that not enough is done concerning these issues, partially due to just plain ignorance. We will propose some ways to alleviate the problem.
4. To discuss the usual tools to fight plagiarism and their shortcomings.
5. To propose ways to overcome most of above problems according to proposals by Maurer/Zaka. To examples [sic], but to make it clear that do this more seriously [sic] a pilot project is necessary beyond this particular study.
6. To briefly analyze various views of plagiarism as it is quite different in different fields (journalism, engineering, architecture, painting, …) and to present a concept that avoids plagiarism from the very beginning.
7. To point out the many other dangers of Google or Google-like undertakings: opportunistic ranking, analysis of data as window into commercial future.
8. To outline the need of new international laws.
9. To mention the feeble European attempts to fight Google, despite Google’s growing power.
10. To argue that there is no way to catch up with Google in a frontal attack.
11. To argue that fighting large search engines and plagiarism slice-by-slice by using dedicated servers combined by one hub could eventually decrease the importance of other global search engines.
12. To argue that global search engines are an area that cannot be left to the free market, but require some government control or at least non-profit institutions. We will mention other areas where similar if not as glaring phenomena are visible.
13. We will mention in passing the potential role of virtual worlds, such as the currently overhyped system “second life”.
14. To elaborate and try out a model for knowledge workers that does not require special search engines, with a description of a simple demonstrator.
15. To propose concrete actions and to describe an Austrian effort that could, with moderate support, minimize the role of Google for Austria.

Among the authors’ claims are that Google is “massively invading privacy,” that its SERPS (search results) are corrupted by its ad system (favoring advertizers) and that this is a necessary result of its for-profit structure, that the internet itself is becoming skewed to a slanted “Google-Wikipedia version of reality,” that by acquiring extensive privileged information Google is positioned to play stock markets with what amounts to insider information and massively affect world economic structures, that commercial considerations cause Google to condone plagiarism, and more.

While particular charges may be debated, the idea of so much of the world’s information being held by a single company should give anyone pause. Should search be government-controlled or regulated on a nonprofit basis as the authors’ suggest? Wouldn’t such information in the hands of government be at least as troubling as the present arrangement? Or is Google such a power now that it is already in effect a kind of virtual world government of sorts, operating at the bequest of its shareholders? Can massive knowledge be regulated without compounding its potential exploitation?