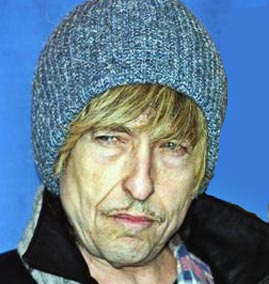 I’ve been reading about Bob Dylan’s recent scrape with the law in Long Branch, New Jersey, where being a complete unknown appears to be illegal. Trying to reconstruct the sequence of events, I figure it happened something like this.

Everyone was either making love or else expecting rain. A long black cloud was coming down. In the jingle jangle morning the weather forecast said a hard rain’s a-gonna fall, but Dylan didn’t care. You don’t need a weatherman to know which way the wind blows.

“I’m not sleepy and there is no place I’m going to,” he thought. He put on his boots of Spanish leather and the next thing he knew he was on the pavement thinking about the government — he had a head full of ideas driving him insane. They strangled up his mind, and now people just got uglier and he had no sense of time.

Eventually he found himself in a neighborhood that was hardly the gates of Eden — it looked more like Desolation Row. The winds were hitting heavy on the borderline. The idiot wind just wouldn’t let up, and it began to howl. It was practically a hurricane. Dylan was blowing in the wind like a rolling stone. “Geez,” he thought, “I can’t see my knees.” Naturally he sought shelter from the storm.

The rain and wind had made him look like Napoleon in rags. A neighbor saw him standing in a doorway looking at a sign on the window. “What kind of house is this,” he asked himself, “where I have come to roam?” He was ragged and dirty (actually his clothes were dirty but his hands were clean), and she thought he was only a lonesome hobo. But what if he were a joker or a thief?

Next thing he knew this cop came down the street, crazy as a loon. She pulled him over to the side of the road. Something was happening here, but she didn’t know what it was. Dylan said he had no trouble in mind. “You say you’re looking for someone,” he said, “but it aint me you’re looking for. You go your way and I’ll go mine.”

But the cops don’t need you and man they expect the same. “The riot squad they’re restless, they need somewhere to go,” she replied. “And at midnight all the agents and the superhuman crew come out and round up everyone that knows more than they do.

“If you go to jail,” she continued, “you’ll find that a man can’t give his address out to bad company. And negativity won’t pull you through — don’t say I never warned you. You see,” she concluded, “one should never be where ones does not belong. So don’t go mistaking paradise for that home across the road.”

At first Dylan was defiant. Didn’t this cop know the circles he moved in? “Aw come on now,” he said, “you must know about my debutante.” But the cop replied, “Your debutante just knows what you need. But I know what you want.” So he turned cooperative. He was a worried man with a worried mind. Deep inside his heart he knew he couldn’t escape. When the game got rough the joke would be on him. You can’t win with a losing hand. He swallowed his pride — he would not die, he was not poisoned. “I shall be released,” he thought.

“I’m not about to argue,” Dylan told her. “I’m not about to move to no other place. I ain’t sayin’ you treated me unkind,” he went on. “You could have done better but I don’t mind. You just kinda wasted my precious time. But don’t think twice, it’s all right.”

How did it feel? The answer was blowing in the wind.

“We see a lot of people on our beat, and I wasn’t sure if he came from one of our hospitals or something.”

“I asked him what his name was and he said, ‘Bob Dylan,’ Now, I’ve seen pictures of Bob Dylan from a long time ago and he didn’t look like Bob Dylan to me at all.”

“He was really nice, though, and he said he understood why I had to verify his identity and why I couldn’t let him go.”

Top unverified rumor about the incident

“After news broke that music legend Bob Dylan was picked up by a New Jersey cop who failed to recognize him, President Barack Obama has invited the duo to the White House for what aides are calling a ‘bong summit.'” — Huffpost