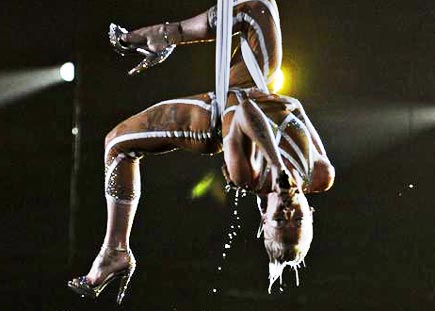 Back in the Jacobean period, the early seventeenth century, Shakespeare was seeming a bit old-fashioned to the lord and ladies in the expensive seats. They wanted a little pomp and spectacle — well, a lot of pomp and spectacle actually — and they got it in the form of the court masque. The masques were little dramas that combined song and dances and a lot of stage machinery that allow gods and goddesses to descend from the heights. The stage machinery was usually designed by the king’s architect, Inigo Jones. The words were usually written by the foremost playwright of the day, Ben Jonson. Inigo and Ben had a falling out: Jonson said the words were the most important thing in a masque, but Jones said they were secondary to the spectacle.

I’ve never been a big fan of the Grammys, but I watched some of it this year. Talk about big productions! (Tacky, but big.) Clearly the Jones school of thought has triumphed.