Two Lines is calling for submissions for its 15th anniversary edition. This volume will be edited by John Biguenet (prose) and Sidney Wade (poetry). The deadline is October 22.

An excerpt from del Paso’s Palinuro of Mexico, translated by Elizabeth Plaister, is included in New World / New Words: Recent Writing from the Americas, A Bilingual Anthology, now at the printer.

Palinuro of Mexico on sale at amazon.com 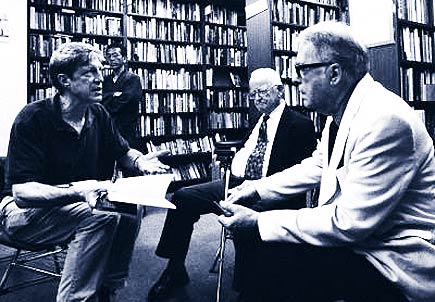 END_OF_DOCUMENT_TOKEN_TO_BE_REPLACED

The University of Rochester has begun offering an undergraduate certificate in literary translation. This is a great idea.

Meanwhile the department of comparative literature at the University of Wisconsin-Madison (where I studied) is fighting threats to close the department.

UPDATE, 26 August 07: “Outrageous ignorance” at the University of Wisconsin.

Meanwhile, French readers are frustrated that it’s taking the official translator more than two weeks to complete a translation of the 759-page book.

An Essay on Translation

I’m posting this again because, when I linked to it before, a few weeks ago, there was an error in the link (I only recently discovered that — I’ll try to get it right this time). This is the introduction to my book on literary translation from the Center for the Art of Translation (link below). The final stages of proofing have really been dragging on, but it’s beginning to seem the book will finally appear before too long. I think the essay isn’t too bad; I’m hoping it might pick up a link from somewhere. Here’s the opening:

In the Popul Vuh, one of the handful of Mayan texts to escape the auto-da-fé of the Spanish missionaries of the sixteenth century, the story is told that the first people who had speech sufficient to praise the gods were made of maize. Their language was the language of the gods themselves. When those first people gazed into the distance, they could see clear to the edge of the world and the end of time. But the perfection of the people of maize alarmed the gods, especially when they began to multiply and overrun the earth. Their perfect speech was withdrawn, and instead each group was endowed with its own language.

So we live in a broken world, the world of Babel. Our world is broken, because our language has been shattered into thousands of fragments. Words are no longer the perfect, transparent embodiment of things themselves but instead are mere pointers, signs by which we grope to know the world from multiple viewpoints….

The University of Rochester has announced a new book publishing imprint called Open Letter. The press will publish twelve books of international literature a year — I guess that means literature in translation. They will also publish an annual of international poetry. Galley Cat offers the following

“We are focusing on twentieth- and twenty-first century literature from around the world-cosmopolitan litera­ture, books that stimulate and provoke readers, and which we hope will be read for generations to come,” said director Chad W. Post, co-founder of Reading the World and former Associate Director of Dalkey Archive Press. Post is joined at Open Letter by E.J. Van Lanen, former Assistant Editor at Ecco, and Nathan Furl, former Marketing and Production Director at Dalkey Archive Press

Two Lines, the journal of translation, is asking readers to send translations of the following lines from Machado. Interesting submissions will be posted on their website and in their newsletter. It’s an intriguing couplet. I made a submission, but it leaves out some parts of the original.

Intolerance has many triggers and takes many forms, but it tends to boil down to in-group and out-group status. Most people favor “people like us.” (Whereas tolerance springs from an acceptance of equality in difference; Tzvetan Todorov’s formulation of this in The Conquest of America: The Question of the Other

is a favorite of mine.)

What’s a bit surprising is how early the process starts, and the extent to which speech plays a fundamental role. Researchers at Harvard and the École des Hautes Études en Sciences Sociales have found that young children favor speakers of their native language — and dialect — even before they themselves have learned to talk. According to the Web of Language, “When the researchers showed babies from English-speaking families videos of English- and Spanish-speaking adults, they found that infants who have yet to master ‘Mama’ and ‘Dada’ were already suspicious of people who said ‘Mami’ and ‘Papi.'”

No doubt this attitude contributes to the fervor of anti-immigrationists.

The researchers “hint that bilingual babies may be more accepting of diversity” and that “manipulating early language experience might actually help to reduce the social conflicts that emerge later on.”

I’m thinking of translators I’ve known. Are they more tolerant than others? Hmmm. I’m not sure, but I think as a group they were more or less like anyone else.

Research article: Spelke et al., “The Native Language of Social Cognition.” Proceedings of the National Academy of Sciences, July 24, 2007.Via: The Web of Language

The most pompous translator of our time? 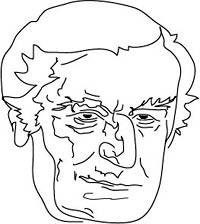 When I saw that the anchor text for a link on Ron Silliman’s blog was “a review of the most pompous translator of our time” I had a brief moment of concern. Then I remembered that my book on translation isn’t out yet.

Ron’s link is to an article called “Ted Hughes and Translation” by Clive Wilmer. Here is an excerpt from Mr. Wilmer’s fulsome text: “Hughes [took] another poet’s translation of a work by the Hungarian Ferenc Juhasz and, without any knowledge of the original language and no Hungarian speaker to advise him, [turned] that version into a thrilling poem that drives the existing versions off the map.” A thrilling poem, maybe. But is it translation, or is it revision (or re-vision)? Does Shakespeare “translate” Boccaccio?

Sketch of th by tc.

Acouple of days ago I completed proofreading first pages of New World / New Words: Recent Writing from the Americas, A Bilingual Anthology, the first volume in a new series from the Center for the Art of Translation called the Two Lines World Library.

I’ve decided to post my introductory essay on this website, here. I’d be interested in any comments. (Bear in mind it’s a print piece, so a little longer than most of my web stuff. And I haven’t broken it up into multiple pages like I often do.)

This book anthologizes translations from Spanish texts from Latin America that were published in the journal Two Lines, along with some other texts from elsewhere.

This project (which I did as a volunteer, to support the mission of the Center for the Art of Translation) has really been moving at a snail’s pace. The publisher was in a big hurry for me to review edits back in September, but the first design pages have only just appeared. I have no idea what was going on in the four intervening months, or when I’ll see proofs. Oh well, at least I’m finally seeing the book announced.

The Ballets of Celine

The great (?) thing about press checks — as mentioned in previous posts I am currently stationed in Bruges on press for a book about Indian art from the kingdom of Mewar — is that it has intervals of idleness between forms. So I have used these to finally post my introduction to Celine’s Ballets Without Music, Without Dancers, Without Anything. Following my usual practice, I will put a link on the page back to this post so that readers can leave comments if they care to do so.