Our ancestors carved “hunger stones” as a warning about climate catastrophe. Will we heed their warning?

Nice to see the great María Félix as a Google Doodle today (April 8, her 103rd birthday). Here she is as Catalina de Erauso in The Lieutenant Nun (from my…

Thanks to Daniel Pritchard and the Critical Flame for publishing my short opinion piece on Shakespeare and globalism. I wrote the piece in conjunction with my participation in…

The pot in the garden

Shakespeare’s garden, that is (click image for link to BBC video).

This is nice. While I was traveling I received this e-mail: Dear Tom Christensen, On behalf of the Northern California Book Reviewers (NCBR), I am delighted to tell…

Some highlights (well, hey, the topic interests me): Cleveland Plain Dealer (March 29, 2012) “Thomas Christensen’s 1616 is a delight, an adventure, a reading and visual treat of the first order….

Earlier I talked about creating a landing page for my book 1616. At that time I just put together a quick image map with hot spots for links….

Living in the material world

An advance copy of 1616 arrived this week. I gather only a couple of copies were air shipped from the printer (R.R. Donnelley) in China, so it was…

1616 received a starred review yesterday in Publishers Weekly. PW, the most influential of the big four advance review publications (the others are Kirkus Reviews, Booklist, and Library…

Seeking the man behind science’s champion

North American Turkey, ca. 1612, by Mansur. Victoria and Albert Museum, IM 135-1921. In honor of Thanksgiving, here’s a painting of an American turkeycock by the great Mughal…

I made two trailers for my forthcoming book 1616: The World in Motion. The short one is a little over a minute long and has no voice-over narration….

“Outstanding book. Tom Christensen’s scholarship is meticulous. The reproductions are beautiful. 1616 is a treasure.” — Evan S. Connell, Jr. I got this nice blurb from Evan S….

“With its stories of restless spirits and restless feet and its truly amazing images from Japan to Persia to Rome, this book will surprise and delight every reader… 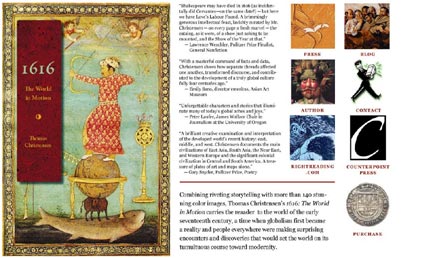 I made a simple landing page for 1616. (It’s just a big image map — a picture with clickable areas –that’s about 200 KB.) If it doesn’t load and look okay for you let me know.

There’s room to expand to the right. If I get another blurb or two I’ll shift the brief descriptive copy right. That copy is adapted from the publisher’s catalogue. Even though I live in Richmond, home of Rosie the Riveter, I would not normally refer to my own writing as “riveting.” But I am trying to be a good compliant author.

UPDATE 1: The blurb text was too small so I moved the descriptive copy right. Compare the finished page to the thumbnail above by clicking though on it.

UPDATE 2: I added a simple slide show of sample spreads. 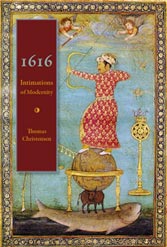 1616
The World in Motion
By Thomas Christensen

The world of 1616 was a world of motion. Enormous galleons carrying silk and silver across the Pacific created the first true global economy, and the first megacorporations were emerging as economic powers rivaling political states. In Europe In Europe the deaths of Shakespeare and Cervantes marked the end of an era in literature. The spirit of the Renaissance was giving way to new attitudes that would lead to the age of revolutions. Kepler and Galileo, following Copernicus, claimed that the earth itself revolved. In Persia the philosopher Mulla Sadra said that motion was the very essence of existence. In East Asia the last native Chinese dynasty was entering its final years, while Japan was beginning its long period of shogunal rule. Artists there, as in many part of the world, were rethinking their connections to ancient traditions and experimenting with new directions. Women were redefining their roles in family and society. Slave trading was relocating large numbers of people, while others were migrating in search of new opportunities — a Japanese samurai became governor of a province in Thailand, an Ethiopian slave became the prime minister of a principality in India, a Powhatan maiden from Virginia attended a royal court masque in London. The first tourists, traveling not for trade or exploration but for personal fulfillment, were exploring this new globalized world: an Englishman walked across India, an Italian explored Muslim West Asia, a Chinese scholar spent decades compiling a massive account of journeys through China.

In 1616: The World in Motion Thomas Christensen illuminates these changes by focusing on a single riotous year, telling surprising stories of the men and women who were forging a new world and drawing unexpected connections across countries and continents as he traces the developments that would set the world on the march to modernity.

THOMAS CHRISTENSEN’s previous books include New World/New Words: Translating Latin American Literature, The U.S.–Mexican War, and The Discovery of America, as well as translations of books by such authors as Laura Esquivel, Carlos Fuentes, Julio Cortázar, Alejo Carpentier, and Louis-Ferdinand Céline. He is director of publications at the Asian Art Museum in San Francico.

The above is very early promotional copy for my new book, tentatively scheduled for publication in January 2012.

At this time I need to update the cover image, which is still showing an older version of the subtitle. I love the cover painting, which combines Western, Hindu, Muslim, and other elements. Art critics call this style of painting, commissioned by the Mughal emperor Jahangir, “allegorical painting” — this painting suggests Jahangir’s (imagined) world domination. The painting, by Abul Hasan, depicts Jahangir shooting an arrow through the mouth of the decapitated head of Malik Ambar (a rebel leader; this part of the painting is hidden behind the book title cartouche). The painting dates, naturally, from 1616.

I suspect the subtitle may change.

. I’ll just update the time stamp to keep this at the top of the category page. 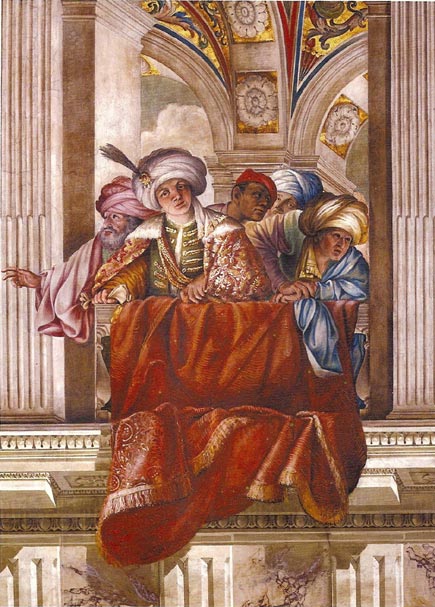 Help! For the book I’m working on I’m trying to identify the painters of these frescos in the Quirinale (the Italian equivalent of the White House). They depict foreign ambassadors to the Vatican, and I’d also like to identify the ambassadors — but first things first. 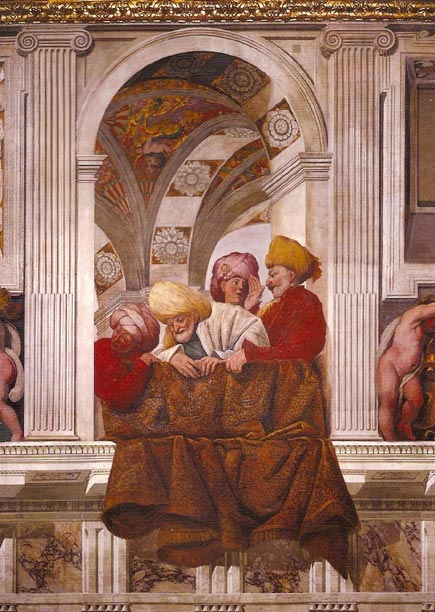 I’ve consulted several books in both English and Italian but remain uncertain about the attributions. My best guess at this point is that the top two are mainly by Carlo Saraceni, the third one by Agostino Tassi, and the last one perhaps by Giovanni Lanfranco. 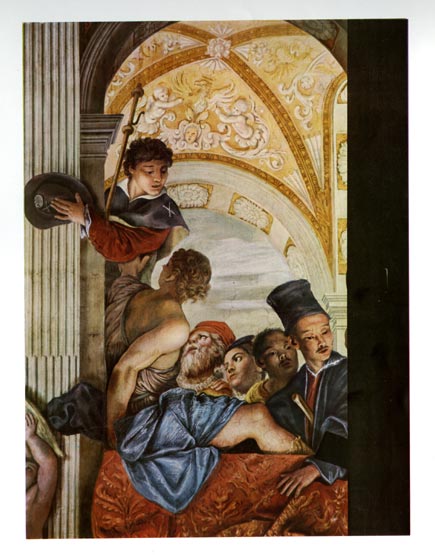 Among the ambassadors are Robert Sherley, Aliqoli Beg (not entirely sure who that is), Emanuele Ne Vunda, Hasekura Tsunenaga, and Luis Sotelo (the last a Franciscan missionary and not an ambassador per se). Can the Turkish and Persian ambassadors be distinguished by their styles of turbans? 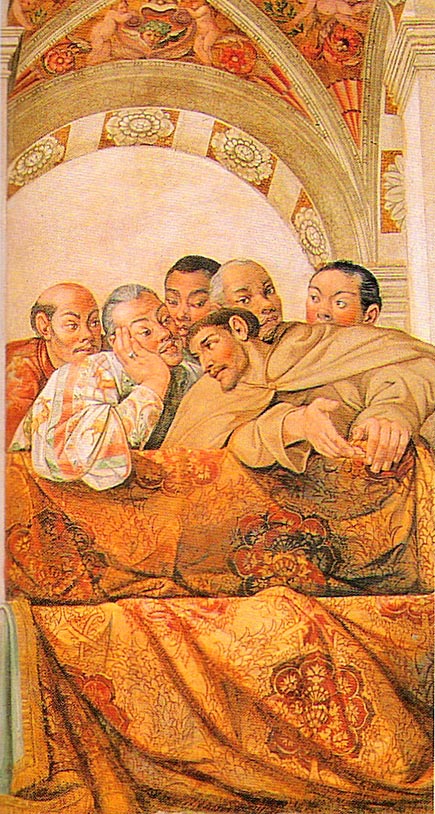 Even if you don’t know the answers to these questions, if anyone can point me in the direction of an obliging Italian painting specialist I could be in touch with about this it would be a great help. Thanks!

Gary Snyder generously agreed to review my manuscript despite being in the middle of extensive traveling (to L.A. for a Lew Welch memorial and to Spain with Jim…

I just received this blurb from Emily Sano. Emily was kind enough to read the manuscript on short notice. She writes, “I read the whole book! Loved it.”…

Peter Laufer was kind enough to provide a blurb on short notice, working from the not-quite-finished manuscript: Tom Christensen’s vividly illustrated 1616: The World in Motion is filled with…

I suppose I should have seen this coming, but I was surprised when my publisher told me catalogue copy (which looks similar to this) is due, and it… 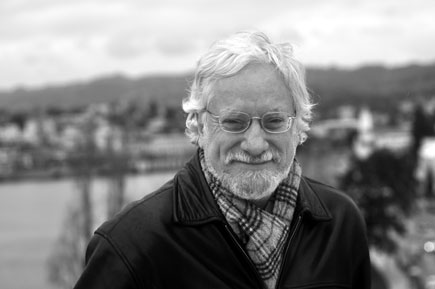 My author questionnaire and author photo for 1616: The World in Motion are due this week to Counterpoint Press. My daughter Ellen, who is a brilliant photographer, among other things, took this photo from the roof of her apartment overlooking Lake Merritt in Oakland. It was raining lightly at the time, and later that day ice would fall from the sky.

In Tom’s Glossary of Book Publishing Terms the author photo is defined as “Pictorial fiction. Authors always choose photos that emphasize that quality in which they feel most deficient.” So what does this say about me? I dunno — but I will say, as a guy who has been cutting his own hair for years, that I don’t think the hair looks too bad. 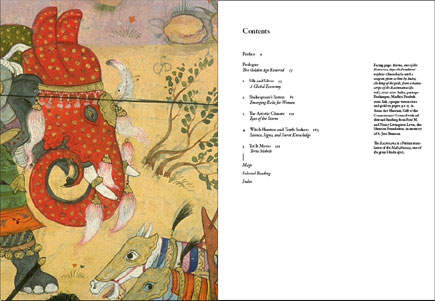