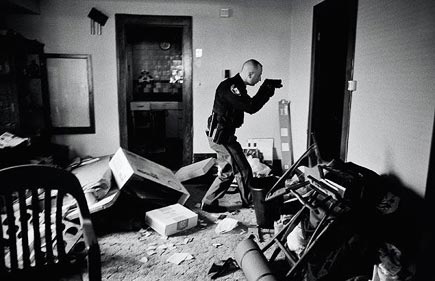 Maybe by the time this post runs the photo will have been widely printed. If not, you can still try your luck at guessing what this picture — which won the 2008 World Press Photo of the Year contest — represents. Answer after the break …

According to the Telegraph, the photo shows “an armed sheriff moving through an American home after an eviction due to a mortgage foreclosure….Jury members said the strength of the photo by Anthony Suau for Time magazine was in its opposites – it looks like a classic war photograph, but is simply the eviction of people from a house.”