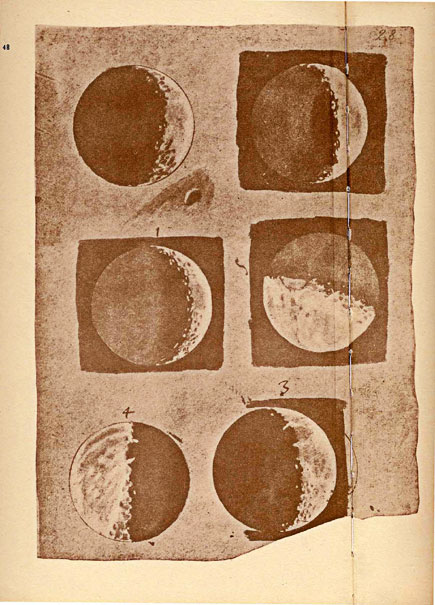 This sepia drawing of the phases of the moon was found in a manuscript copy in Galileo’s hand of his Starry Messenger, the book that made him an international celebrity. In it Galileo reported his celestial observations with the telescope, a recent Dutch invention that he had refined and considerably improved, working with artisans of the Italian Veneto.  The manuscript is now in the National Library in Florence.

Although there seems to be no definitive proof that the drawing is by Galileo, it is usually thought to be either his original sketches made while looking into the telescope or else studio proofs that would serve as models for the engravings that appeared in the book itself. (Wikipedia will tell you it was made in 1616, but if it is indeed by Galileo must have been done around 1610, when The Starry Messenger was published.) In either case, it is rather beautiful.

But it didn’t seem that way to many people at the time. It was a shock and an affront to suggest that God’s heavenly objects were not perfect but pocked and roughened with craters and protuberances like some ordinary rock of the earthly realm. This would all come to a head when Galileo visited the pope in 1616 …

LINK: There is a detailed discussion of this document at http://www.pacifier.com/~tpope/Moon_Page.htm#Watercolors