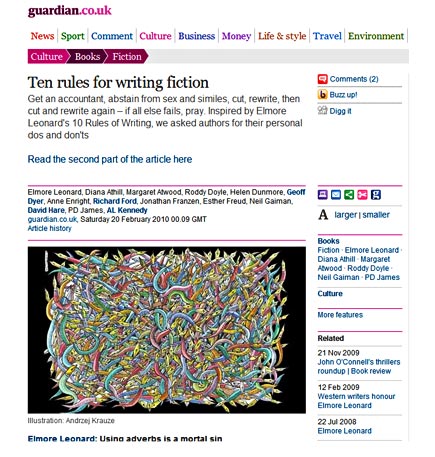 Today I initiate what I am hoping will become a more or less weekly feature here at blog.rightreading.com — a report on book news from newspapers and journals around the world. (I say “more or less weekly” because I am currently working on a big project that is taking most of my time, and this has reduced my blogging, which had been steadily daily up for years until a few months ago; more on that project in time.)

I think I will eventually move this feature to Thursdays. My plan is to spotlight one interesting story selected from a variety of sources of world book news, include a screen shot linking to the original, and briefly recap or comment on the story. Please let me know if this would be of interest, and I would love to hear suggestions regarding international sources I should include when looking for stories (in my languages: English, French, Spanish, Portuguese, Italian).

Leonard wasn’t actually consulted for the article — he had already done his 10 rules for good writing, and they served as inspiration for the piece. Following is my selection of 13 favorites chosen from those offered by the contributors to the article.

1
Diana Athill: Read it aloud to yourself because that’s the only way to be sure the rhythms of the sentences are OK (prose rhythms are too complex and subtle to be thought out – they can be got right only by ear).

2
Margaret Atwood: You can never read your own book with the innocent anticipation that comes with that first delicious page of a new book, because you wrote the thing. You’ve been backstage. You’ve seen how the rabbits were smuggled into the hat. Therefore ask a reading friend or two to look at it before you give it to anyone in the publishing business. This friend should not be someone with whom you have a ­romantic relationship, unless you want to break up.

3
Roddy Doyle: Do not place a photograph of your ­favourite author on your desk, especially if the author is one of the famous ones who committed suicide.

4
Helen Dunmore: A problem with a piece of writing often clarifies itself if you go for a long walk.

5
Geoff Dyer: Don’t be one of those writers who sentence themselves to a lifetime of sucking up to Nabokov.

6
Anne Enright: Try to be accurate about stuff.

7
Richard Ford: Try to think of others’ good luck as encouragement to yourself.

8
Jonathan Franzen: Never use the word “then” as a ­conjunction – we have “and” for this purpose. Substituting “then” is the lazy or tone-deaf writer’s non-solution to the problem of too many “ands” on the page.

9
Esther Freud: Don’t wait for inspiration. Discipline is the key.

10
Neil Gaiman: The main rule of writing is that if you do it with enough assurance and confidence, you’re allowed to do whatever you like. (That may be a rule for life as well as for writing. But it’s definitely true for writing.) So write your story as it needs to be written. Write it ­honestly, and tell it as best you can. I’m not sure that there are any other rules. Not ones that matter.

11
David Hare: The two most depressing words in the English language are “literary fiction.”

13
AL Kennedy: Defend yourself. Find out what keeps you happy, motivated and creative.