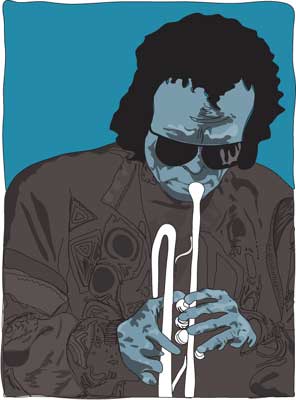 This is off topic from my usual subject areas, but I haven’t seen this technique suggested anywhere else, and I thought I would share it since it’s so easy and produces good results.

Since I sometimes travel overseas, I wanted to get an unlocked quad-band cellphone that I could use abroad by switching simm chips, rather than pay the outrageous fees for overseas calls of the U.S. cellular providers. Other countries offer such chips on a pay-as-you-go basis without locking you in to a long-term commitment I purchased the phone from cellularblowout.com

I already had a usb cable that fit the phone. It took me a while to realize that the simm card is not also a memory card. Once I got past that bit of dimness I installed a memory card (I happened to have one the right size), which enabled me to drag files to the phone’s memory using Windows Explorer.

I wanted to use “So What” by Miles Davis as my main ringtone. But I didn’t want to deal with the hassle of audio editing to create a sound file that would be the right length. Like most recent phones, mine can play MP3s as sounds. It occurred to me that the little sample sound snippets that amazon.com offers on its CD pages are just about right. So it was just a matter of activating the Freecorder toolbar (for me it doesn’t work well on Firefox — I think it conflicts with some other toolbar — so I use Internet Explorer). I set Freecorder to record and amazon to play, and voila.

At that point it’s just a matter of saving the file and dragging it to the phone’s memory card.

So adult it smarts