What is the best time of day to post to a blog? 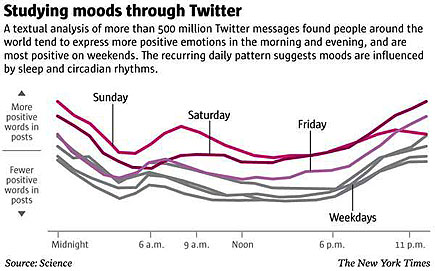 These days I’m pretty casual about my web presence, but a few years ago I gave some thought to maximizing the impact of blog posts. I ended up scheduling most of my posts for 5:00 am Pacific time. My strongest geographical regions were the U.S. east and west coasts, and that would be 8:00 Eastern time. A lot of people check their feeds in the morning, and it is incontrovertible that most people do the bulk of their browsing at work, little as employers like hearing this (so I mainly post on weekdays).

A new study purporting to track people’s affective states through the day brings new information to this topic. Researchers tracked the relative use of positive and negative words in tweets at different times of the days throughout the week. They found that negative terms predominated early in the morning and mid-to-late afternoon, while positive terms were most common from 6:00 to 9:00 am and in the late evening. The pattern held even on weekends, when most people aren’t going off to work.

The methodology can be questioned. Harvard psychologist Dan Gilbert points out that “if you counted the good and bad words people said during intercourse, you’d mistakenly conclude they were having an awful time.”

Supposing the results are valid, what are the implications for people posting to the web? Should you make negative posts when people are most negative and positive posts when they are most positive? Or should you always try to post when people are positive and will presumably be most receptive to what you are saying? Or does this not matter at all, and what you should really be looking at is the volume of traffic — my guess is that while people might be feeling positive around 10:00 pm there are probably significantly fewer of them online at that time than in the morning.