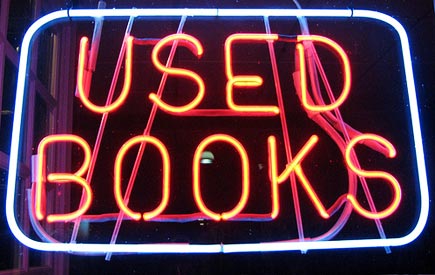 Having completed my scriptorium and tabularium and got my books somewhat organized, I found myself with a bunch of duplicates and some other books I no longer needed. So I gave some away and boxed a bunch more up to exchange at a used bookstore.

At the store the buyer rejected most of the books (as is to be expected). Then she “softened” her rejection with the condescending concession (and I quote) “It’s good stuff. It’s just stuff whose time has passed.” So there you have it, laid out as starkly as could be: books as a perishable commodity!

I was tempted to look pointedly around the store and then reply, “Oh, I know. That’s why I’m replacing them with a Kindle.”

But I wouldn’t do that.