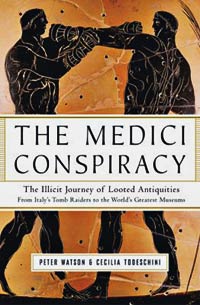 Peter Watson and Cecilia Todeschini’s The Medici Conspiracy: The Illicit Journey of Looted Antiquities–From Italy’s Tomb Raiders to the World’s Greatest Museums is a real eye-opener. I had always imagined that the movement to repatriate art was largely based on the rape of colonial nations by the colonizers — that countries like Italy or Greece were trying to recover objects that had mostly been removed long ago. But Watson and Todeschini reveal that there is an extremely extensive digging operation going on right now that is turning up invaluable ancient art. (The clandestine diggers are known as tombaroli, or tomb robbers.) And this art is deliberately broken, smuggled in fragments out of their homelands by elaborate criminal networks (cordate), and reassembled. Then, with the explicit complicity of some auction houses, collectors, and museum curators who work closely with these criminal networks, the art makes its way to museums like the Getty or the Met. Sometimes, to conceal the criminal connections, the objects are acquired from third parties as sets of fragments over a period of years and then finally reassembled by museum conservators.

The books reads like a police procedural. The authors worked closely with the Italian investigators and had ample access to documentation related to an elaborate art smuggling ring that funneled art through a dealer named Giacomo Medici. Medici kept elaborate, detailed records of his activities in a warehouse full of antiquities in Geneva; these records were key to breaking the case. The authors also rely extensive on police interrogations of principal figures in the smuggling network.

An essential book. As Art Quarterly says, “You’ll never again look at some lovely painted pot in a museum . . . without a sharp stab of unease.” (For a dissenting, if not very convincing, view that attempts an apology for some of the museum curators involved in the case, see Hugh Eakin’s review in the New York Review of Books.)

Buy from Powell’s
Buy from Amazon