A new portrait of William Shakespeare 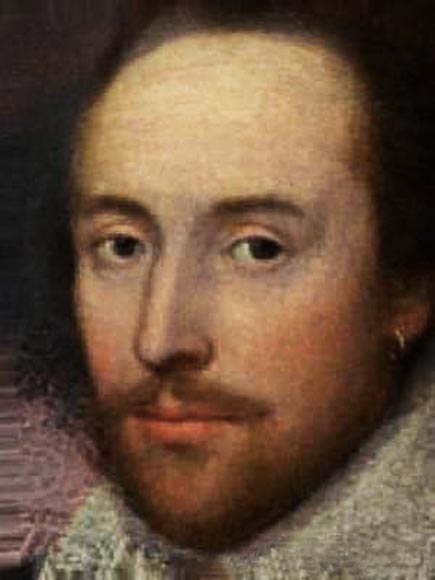 What did Shakespeare look like? I will come to how I created the above image in a moment. First we need to review the existing portraits that are claimed to be of Shakespeare.

All of the three or four likeliest images of him are problematic in one way or another. The three likeliest portraits are the Cobbe portrait, which portrays the forty-something Shakespeare as a gallant young courtier; the Chandos portrait, which presents him as a comfortably well-off bohemian; and the Droeshout portrait — the familiar one from the first folio — which is so inempt and cartoonish that it gives little sense of any real person. (A Scientific American article once put forth the bizarre theory that it actually depicts Queen Elizabeth). Brice Stratford has helpfully assembled the three portraits, along with some supporting text, on this page. As you can see from the details below, all of the portraits share points of similarity, notably the high forehead, deep-set eyes, and long nose. 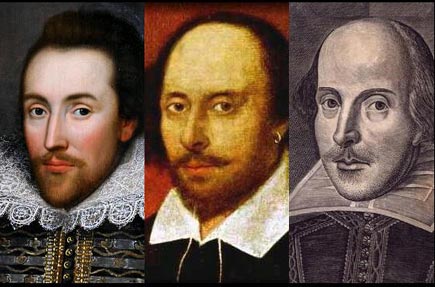 The problem with the Droeshout portrait (right) is that its young and inexperienced artist never met Shakespeare. He may have worked from the Chandos portrait, although this is speculation. Still, Ben Jonson and others who knew Shakespeare seem to have approved the image.

The problem with the Chandos portrait (middle) is that its ultimate provenance is unknown, and the sitter is not identified as Shakespeare. Still, the National Portrait Gallery in London, which has researched the issue, believes that this is probably Shakespeare, though there is no proof of that. I like this candidate because it is from the right period — the first decade of the seventeenth century; the black robes suggest affluence, and we know Shakespeare was doing pretty well by this time; and the rakish earring suggests a bohemian or artistic lifestyle. Moreover, this image simply has more presence than the others.

The Cobbe portrait (left) only came to light recently. It had been in the possession of the Cobbe family for 300 years. They had thought it a portrait of Sir Walter Raleigh but it is now believed that it may be a portrait of Shakespeare. It too dates from the right period, and there is at least a tenuous provenance for it, as the Cobbe descent can be traced back to a patron of Shakespeare. Stanley Wells, chairman of the Shakespeare Birthplace Trust and co-editor of the Oxford Shakespeare, vouches for the authenticity of this one. The problem that I have with it is that it does not appear to depict a man in at least his mid-forties as Shakespeare would have been at the time the painting was made. In addition, the Cobbe family had good reason to think it a portrait of Raleigh, since it depicts its subject as a nobleman rather than a working playwright. (Although by the time this painting was made the status of playwrights had risen, and Shakespeare had even obtained a court of arms.) Nor does the hairline conform to the other images. But it’s conceivable that the artist simply went overboard in the direction of flattering the sitter.

A fourth image is a bust in Stratford-upon-Avon. This one was made by Gheerart Janssen, an artist who lived near the Globe theater during Shakespeare’s lifetime, and it was presumably approved by people who knew the playwright well. The problem with it is that the painted features had been removed and then reapplied in the eighteenth century, long after anyone who remembered him was alive. In addition, it is likely that the conservative Stratford community wished to make their native son look more like a respectable burgher than something as doubtful as a frequenter of London’s rowdy theater scene. The bust looks like this: 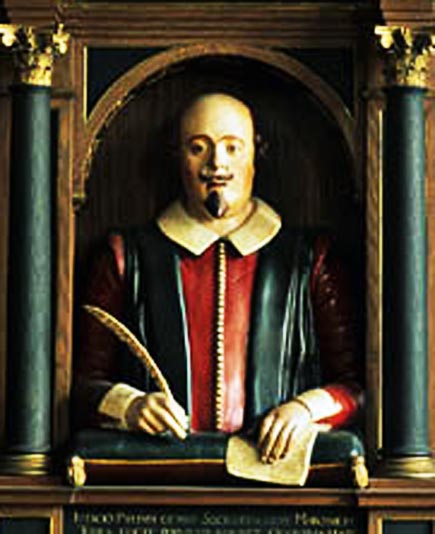 I reject the Droeshout image because it is more of a cartoon than a portrait, and the Statford bust because the loss of the original paint compromises the image too grossly. Despite serious doubts, I am inclined at least for now to entertain the idea that the portraits claimed as images of Shakespeare on the authority of the National Portrait Gallery and the Shakespeare Birthplace Trust convey something of his appearance (these, if you have been paying attention, are the Chandos and Cobbe portraits).

For my Shakespeare, therefore, I computer morphed those two portraits into a new image of Shakespeare — splitting the difference if you will; the midpoint morph makes him a little less rough than the Chandos Shakespeare and a little less prettified than the Cobbe Shakespeare. If both of those portraits are indeed Shakespeare, then this intermediary version should probably be a fairly reasonable likeness. On the other hand, if the Cobbe portrait actually represents someone else — Sir Thomas Overbury has been suggested — well then we have something like an Overbury-Shakespeare morph. In any case, I think the result is an interesting image. Do you agree?

A new look for the BBC