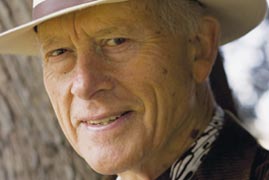 Jim Houston was a good, disciplined writer who put together eighteen or nineteen solid books, divided almost equally betweeen fiction and nonfiction. He was a craftsman whose understated style belied his carestaking attention to every detail of his texts.

If he was frustrated that he probably remained best know for Farewell to Manzanar, which he wrote in 1973 with his wife, Jeanne Wakatsuki Houston, about her family’s detention in the Manzanar war camp, he never revealed it.

He was one of the truest westerners I know. I don’t mean just in his choice of subjects, although he generally wrote about California and the west, but in his spirit. Ted Hoagland said that you don’t have to choose between city and country — you can divide your time between them — but you have to decide between being a westerner and an easterner. I don’t know about that, but being a westerner came naturally to Jim Houston, who was born San Francisco, grew up listening to Hawaiian slack key guitar on the family radio (he played the ukulele), and lived for many years in Santa Cruz.

Most of all what I remember about Jim Houston, though, is that he was a good guy. He was courteous and thoughtful, a real gentleman. He was completely genuine. I regret that I hadn’t seen much of him in recent years — I don’t get out as much since I’ve been working at the Asian Art Museum — and I’m sorry to see him gone.