Publishing Trends has released its first annual publishing industry survey, and I’m not sure there is a great deal of value to take away from it. The survey is probably a worthwhile exercise, but I don’t think it has really found its focus yet. 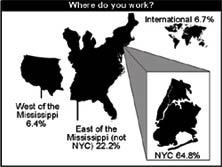 So we won’t spend much time on this. But let’s check out a few highlights. Considering how backward the publishing industry has been for the past about century and a half, it should be no surprise that “15 percent of respondents report that they’re ‘still getting into Web 1.0.'”

No, for me what jumps out is that, while “twice as many [respondents] wrote in with complaints as praise” for the industry, almost 40 percent claimed to find gratification in “contributing to literary culture.” There is a clear disconnect here, as only a minority of titles are published with any intent whatsoever to contribute to culture. Most books are cynical (and usually belated and futile) exercises in pandering to the popular zeitgeist.

It’s no wonder publishing types tend to be a little mixed up and ethically challenged, considering that their personal values and their actual work are so disconnected. Compounding their problems, most are poorly paid, and “cite compensation as the worst aspect of the industry…. After compensation, the unstable market (38.4%), job insecurity (14.8%), and a competitive/unsupportive work environment (11.4%) worry the most.”

Those in marketing are the most satisfied and the least likely to leave. This is not surprising, because they are among the highest paid, and at least professionally they are not living a lie. They admit their goal is to to move books, and that’s what they do. Honest enough work, like editing used to be.

Of course, there are still quite a few dedicated editors and publishing houses who are doing heroic work. (Among California book publishers one thinks of CAT, City Lights, Green Integer, Mercury House, and Shoemaker and Hoard, among many others.) But they are swimming against the tide of an industry that is weighed heavily against them, that takes idealistic interns and turns them into burnt-out cynics who have lost much of their joy in literature.

Extended Live Archives | One year ago