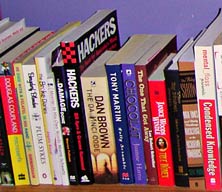 That’s what Rachel Donadio, in an article in the New York Times, calls this sort of situation: You’re in the getting-to-know-you stages of a relationship, and you encounter for the first time the other person’s bookshelf. Could what you see there cause you to break up the relationship then and there? How appalling would the book list have to be?

A shelf full of Any Rand would give me pause. At Donadio’s blog, readers offer their own nominations, which include such books as The Da Vinci Code and The Alchemist and such authors as Rand, Tom Peters, and even Umberto Eco.

The premise has something of a Nick Hornbyish High Fidelity quality to it. A commenter named Dante remarks on Donadio’s blog “Only a completely pretentious jackass would use a book as a measure of someone’s worth.” But another, with the handle of Oscar Wilde, says that “Only superficial people don’t judge by appearances.”

I suppose that blogs would have deal breakers as well. What kind of topic would incline you unsubscribe from a bookish blog?