Photo Wednesday: Bringing it all back home 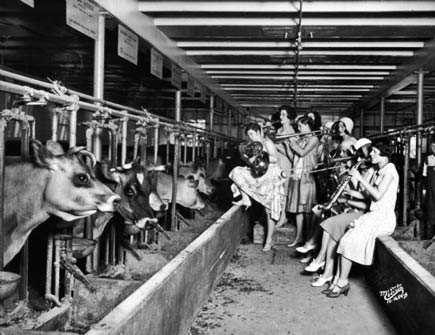 I studied comparative literature at the University of Wisconsin in Madison, where this picture was taken in 1930. It shows the Ingenues, “an all-girls band and vaudeville act,” serenading milk cows as part of an experiment to see if they would produce more milk (the cows, I mean).

I admit I like cheese, but I’m still not fond of cows, which are a grotesque example of genetic engineering, far removed from anything found in nature. They trample and destroy vegetation along streamsides. They ruin hiking trails by planting thistles and weads, not to mention cowpies. Cow farts and belches are depleting the ozone layer.

Wisconsin calls itself “the dairy state,” and an anagram for “Wisconsin” is “sin in cows.” Man, this takes me back.

Photo by the aptly named Angus B. McVicar, from the Wisconsin Historical Society’s photostream.