Absurd Headline of the Day

Bush Heads for Latin America to Counter Appeal of ChÃ¡vez

The headline appeared in the Guardian (where they actually put the diacritic in ChÃ¡vez’s name). I mean, Bush currently has a record low approval rating here in the U.S. Imagine what his approval rating is in Latin America. How many hearts is this guy going to win us with this trip?

What he really wants, I suppose, is to skip town, since the heat is on. No doubt he’ll be traveling in an airtight circle of security and just meeting a few carefully chosen leaders for minutely scripted photo ops.

If we were serious about countering the appeal of ChÃ¡vez we would send Los Lobos on a good will tour, not some rich oil guy who has spent his entire career transfering the world’s wealth to his little coterie of buddies. 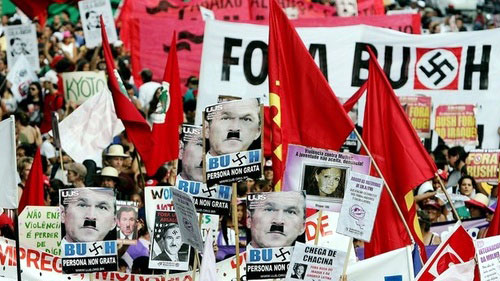