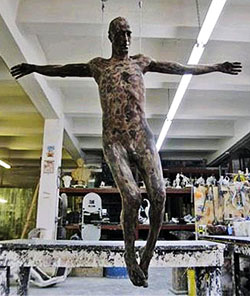 Looks like the Roger Smith Hotel in New York has caved in to demands from the Catholic League for Religious and Civil Rights to remove the art piece My Sweet Lord by Cosimo Cavallaro. A six-foot-tall representation of Jesus on the cross made of chocolate, the piece has apparently offended the League more by its nudity than its calories. (Cavallaro, by the way, has also worked in the demanding medium of ham and cheese.)

All of which is just an excuse for the link below to Tom Waits singing “Chocolate Jesus.”