The Indonesian Curse Is Working 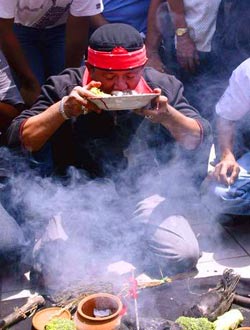 I don’t know much about Ki Gendeng Pamungkas’s curse on GWB, except that it required the blood of a snake, a goat, and a crow and, according to the shaman, “will make him bloat like broccoli.” The image (from the Daily Kos) shows Ki Gendeng Pamungkas drinking sheep’s blood during an anti-Bush rally.

But I can report this: In Buenos Aires first daughter Barbara Bush had her purse and cell phone snatched at a restaurant, despite being guarded by a contingent of Secret Service agents at the time. And, in a separate incident, once of the agents got mugged. Plus, the director of the White House travel office was robbed in a nightclub.

Meanwhile, in Honolulu, three of the Uniter’s motorcyble escorts were involved in an accident at Hickam Air Force Base, and two were transported by ambulance to Queen’s medical center.

Bush and blood: maybe there’s some potent connection there after all.