The naked truth about English pronunciation 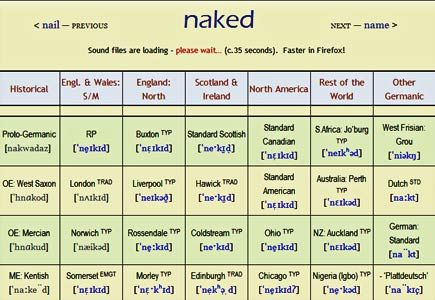 Sound Comparisons is one of those sites that makes you think there just might be something to this internet business. It contains recordings of a variety of words — naked, shown above, is just one — in several English dialects, as well as in related Germanic languages. By hovering your mouse over one of the cells in the table you can hear differences among regions of the U.K. as well as in English-speaking areas around the world — Canada, several regions of the U.S., Singapore, India, South Africa, Australia, and so on — and in languages such as Dutch, German, Yiddish, Icelandic, Danish, and so on. Phonetic history captured on the screen!

via Separated by a Common Language