Jade suit, Western Han period (206 BCE–9 CE), 2nd century BCE. Unearthed from Tomb 2, Dayun Mountain, Xuyi, Jiangsu. Jade and gold. Nanjing Museum, EX2017.1.1. Photograph © Nanjing Museum. Unlike jade death suits that have been seen here in the past, this one was made for a woman.

In 210 BCE Shi Huangdi, the “First Emperor” of China, died at the age of forty-nine, likely from poisoning by the very elixirs that were supposed to make him immortal. He was placed in an underground tomb where he would be protected for eternity by thousands of life-sized terra-cotta warriors. In 2013 some of those warriors took a break from their guardian duties to visit San Francisco as part of the Asian Art Museum’s exhibition China’s Terracotta Warriors.: The First Emperor’s Legacy.

Above ground, things did not go well for the emperor’s people. Less than four years after his death, his empire collapsed. A new power, based first in Chang’an and later in Luoyang, controlled China. It would be known as the Han dynasty, lending its name to the country’s majority ethnic group. It would endure for more than four hundred years (while the West was dominated by imperial Rome). The new dynasty was marked by economic and technical development, as well as a great cultural flourishing. It too left elaborate tombs full of spectacular and intriguing artifacts. Now a new Asian Art Museum show presents 160 such objects, most never before seen outside China, in Tomb Treasures: New Discoveries from China’s Han Dynasty (through May 28).

Few fields have advanced as rapidly as the archaeology of ancient China in recent decades. In the nineteenth and early twentieth centuries, not many archaeologists were systematically exploring sites in China. This omission began to be remedied in the second half of the twentieth century, resulting in the first major exhibition devoted to the new discoveries, Archaeological Finds of The People’s Republic of China, organized by the U.S. National Gallery and the Nelson Atkins Museum in 1974. Twenty-five years later, the same institutions teamed up on another major exhibition, The Golden Age of Chinese Archaeology. Since that time there has been an explosion of archaeological activity in China, and scholars are still working on making sense of the ongoing discoveries.

Traditional Chinese histories tended to treat the nation’s development as the passing of the mandate of heaven from one monolithic dynasty to another. But the archaeological discoveries have suggested that ancient China was more multiplistic and multicultural than had previously been acknowledged. Chinese culture, to judge from the archaeological finds, did not arise in one place and then spread throughout China so much as it arose in multiple and varied locations, with several regional cultural groups all contributing to the mix.

Under the leadership of director Jay Xu, the Asian Art Museum has intensified efforts to strengthen working relations with sister institutions in China, as well as to keep abreast of the rapidly changing developments in the archaeology of ancient China. (Xu received his doctorate from Princeton University with a specialization in early Chinese art and archaeology.) The objects in this exhibition mostly come from mausoleums excavated in 2011 belonging to the Jiangdu Kingdom at Dayun Mountain, and from royal tombs of the Chu Kingdom at Xuzhou, first uncovered in 1995. They were borrowed from museums in Nanjing, Xuzhou, and Yizheng, all located in Jiangsu province, near Shanghai, where the new archaeological discoveries were made.

Co-curated by Xu and Fan Jeremy Zhang, the museum’s senior associate curator of Chinese art, the exhibition is organized into three areas built around Han-era phrases found on period objects:

All of the objects were intended to meet the needs of the Han elite after death, as the tombs were lavishly furnished with a great variety of beautiful and useful items. “These tombs are not simply treasure troves,” Xu says. “They assured that the afterlife would be filled with wine, music, dancing, and even sex.”

Let’s start with the wine. According to Patrick McGovern, scientific director of the Biomolecular Archaeology Project for Cuisine, Fermented Beverages, and Health at the University of Pennsylvania Museum in Philadelphia (and known as the “Indiana Jones of Ancient Ales, Wines, and Extreme Beverages”), ancient Chinese wines were aromatized with herbs and spices and sweetened with honey. In other words, they were, essentially, vermouth. The exhibition includes bronze vessels for carrying and warming this wine, and well as a ceramic drinking set, among other items. But the most ingenious wine-related object is a vessel equipped with a syphoning tube. This tall, hollow bronze object, decorated with inlays of silver and gold, as well as small pieces of precious stones and agate (now mostly missing), was used to serve beverages during banquets. It is equipped with two small holes. By covering and uncovering the top hole, wine can be drawn into and released from the device. A similar device still used in modern wineries is known as a “wine thief.” 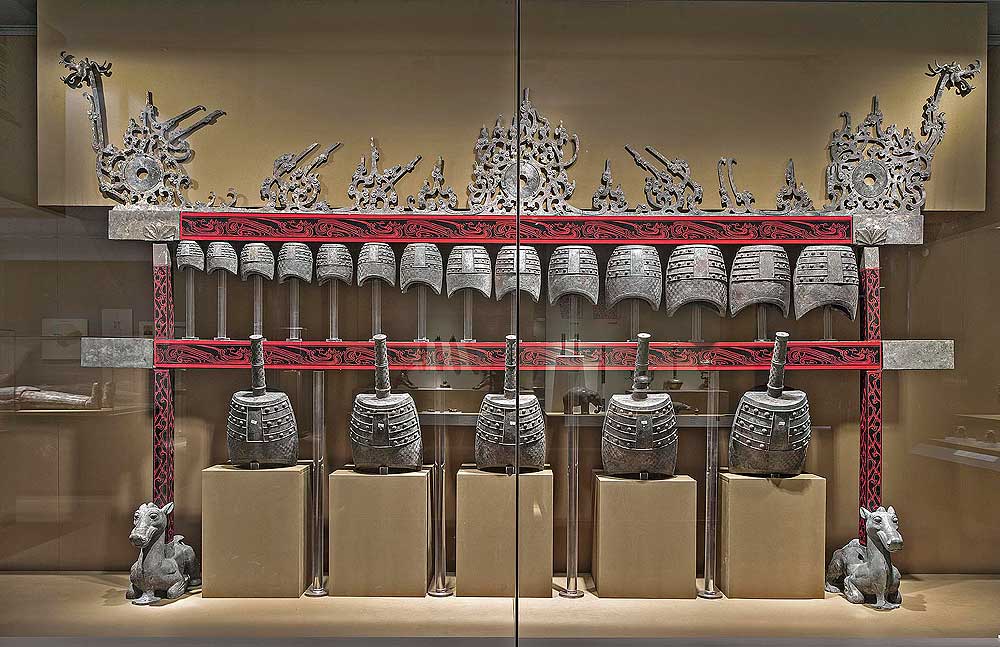 The exhibition includes a handsome set of 19 bronze bells in various sizes, hung in two rows from lacquered wooden crossbeams. Each bell could produce at least two tones, depending on how it was struck. It is a work of surpassing beauty. According to Xu, “This is the most impressive Western Han bell set yet discovered.” 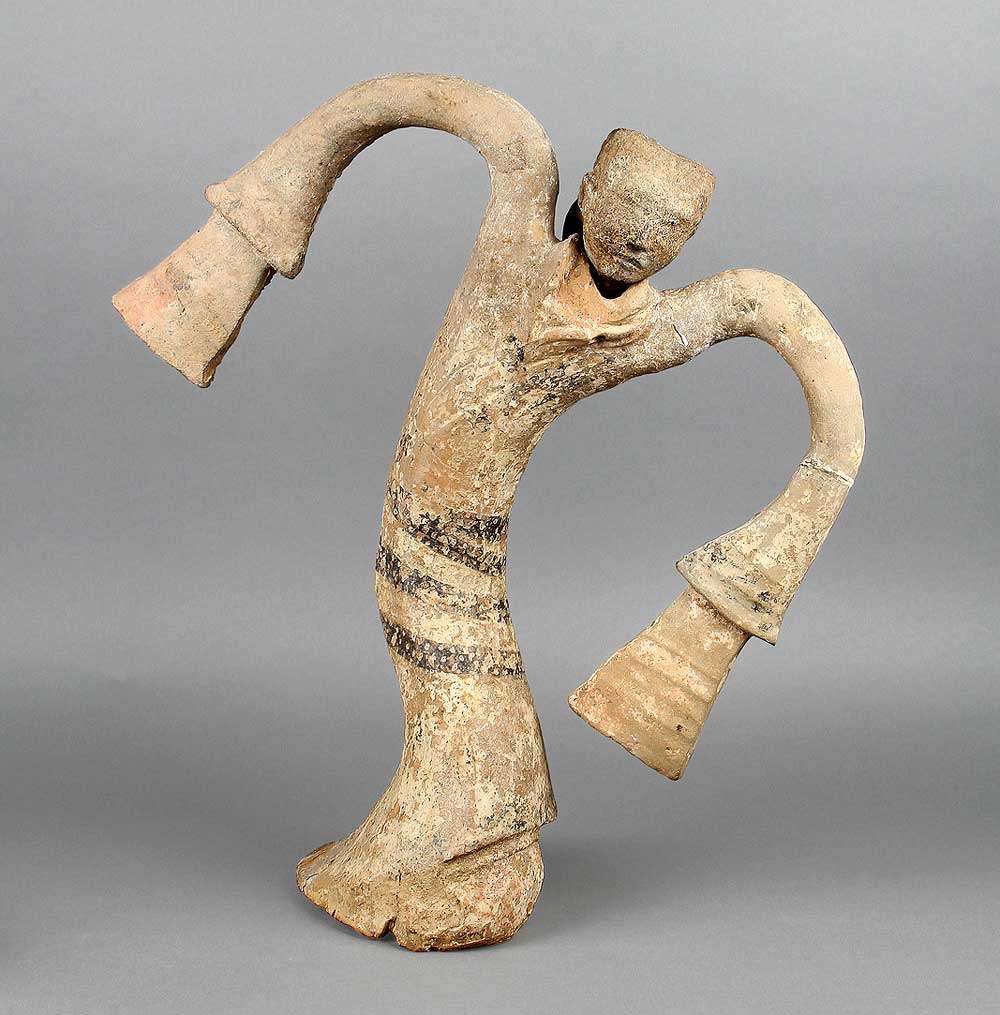 The bells were just one of many musical instruments employed during the Han. “Performers filled the palace with music from zithers, chimes, and bells as talented beauties performed elegant, back-twisting dances,” says Li Yinde, director emeritus of the Xuzhou Museum, in a catalogue essay. “The musicians—all kneeling—strike chimes, strum stringed instruments, and blow upon reed pipes and organs. The posture of a dancer wearing a robe with coiled lapels is bold and unrestrained.” The dancer’s long billowing sleeves make a dramatic fashion statement and must have accentuated her graceful and athletic movements. 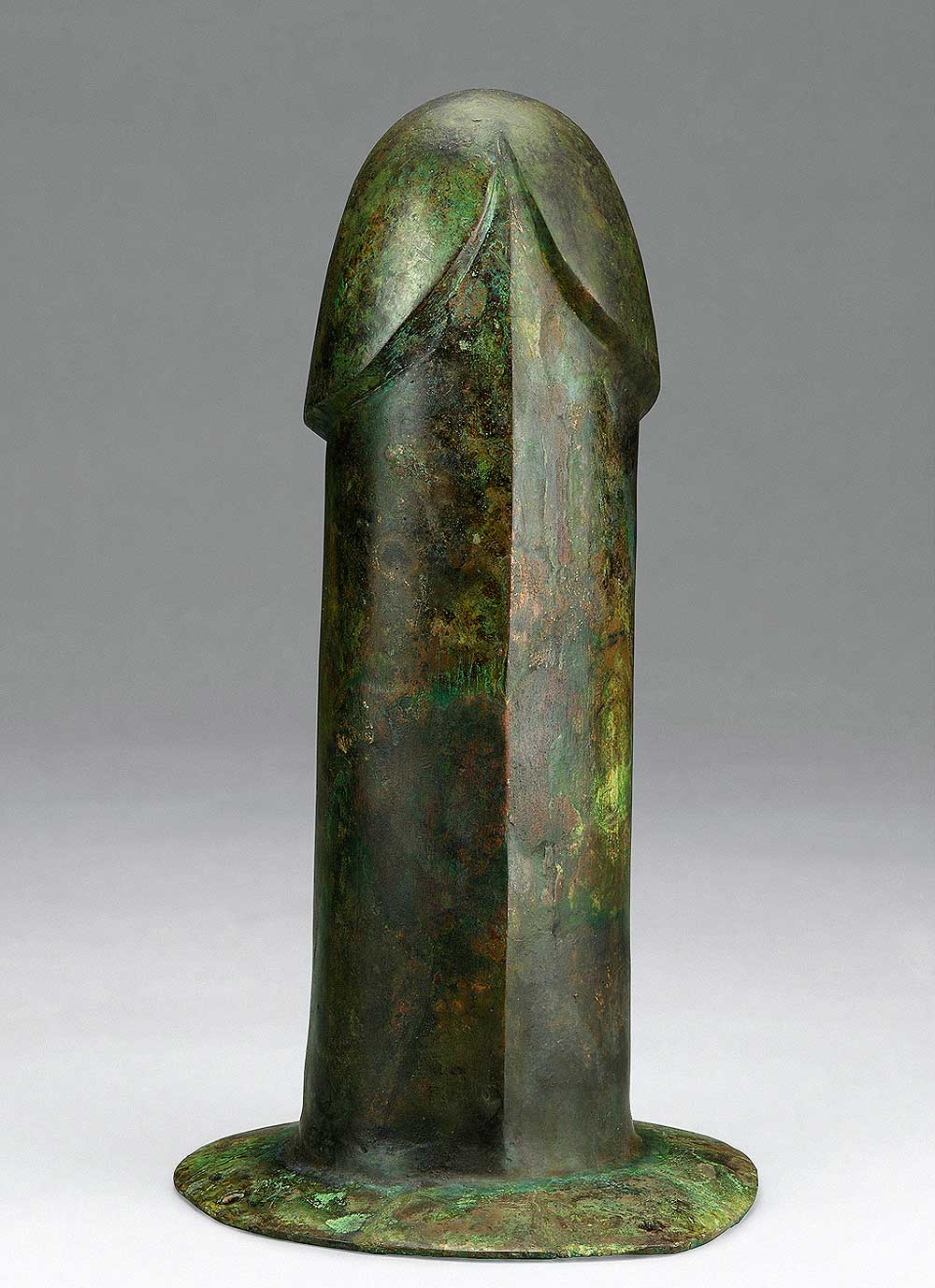 Delicately termed a “phallus” in exhibition materials (an ad featuring the object was rejected by Facebook), this strap-on bronze dildo might make one wonder where all this feasting, wine, music, and dance was leading. Hollow and highly polished both inside and out, it contains holes that would enable it to be lashed onto the body. What an afterlife these folks envisioned! Sadly, no ancient Good Vibrations brochure exists to suggest who was using it and how. In any case, “such phalluses were clearly meant to be utilized,” Xu observes, “likely to enhance a male user’s potency and possibly for use between women.” 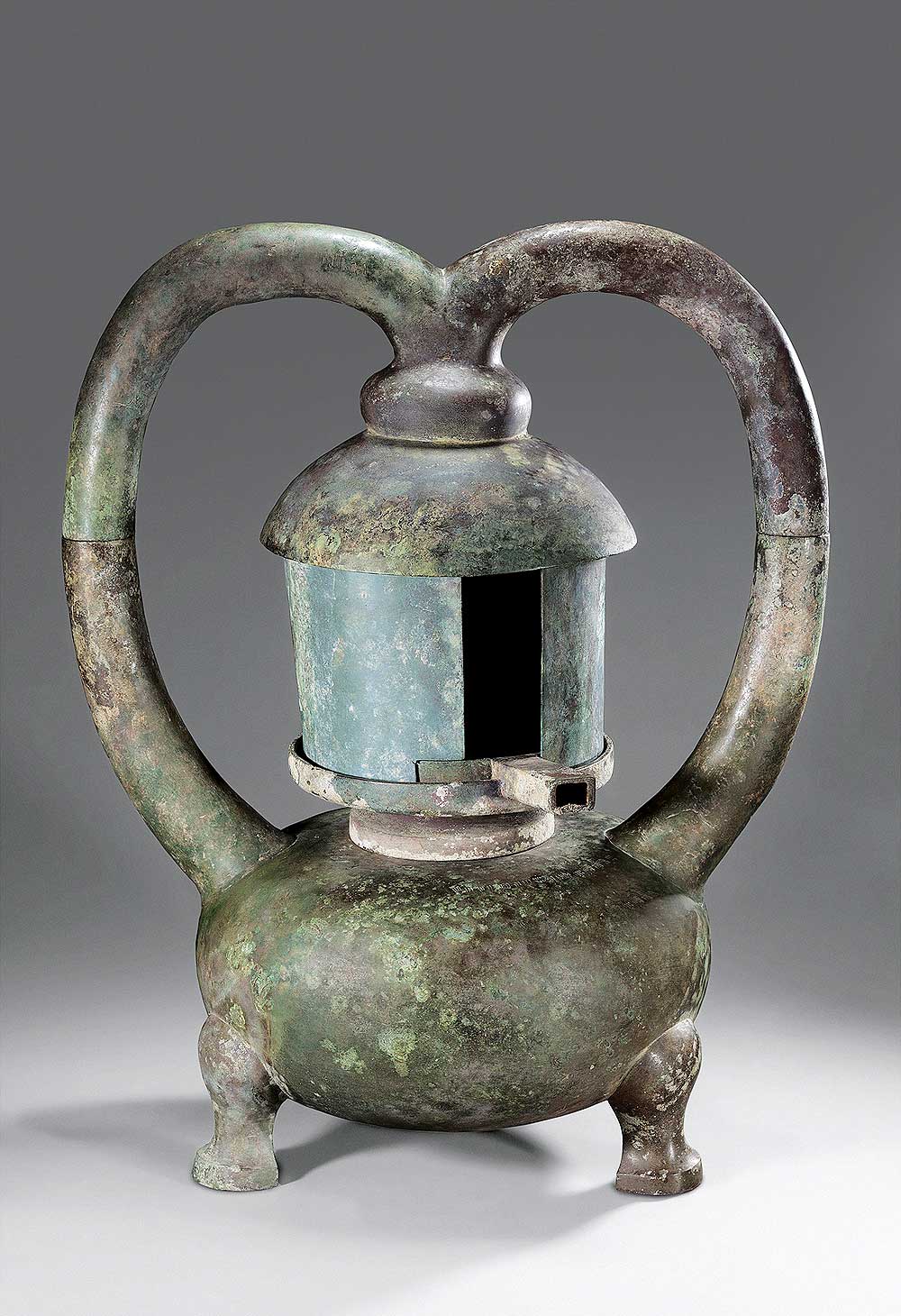 Many other elegant and practical items, ranging from a ceramic toilet to a jade, wood, and lacquer casket, contribute to providing a sense of elite Han life and concept of the afterlife. One of my favorites is this ingenious bronze lamp. The heart-shaped tubes direct the smoke from an inset candle back down to the base, which was probably filled with liquid to filter the smoke. Curved bronze shades in the central portion of the object could be moved around to project the light in a desired direction.

Chinese archaeology is a developing field with much left to be understood. It is scarcely an exaggeration to say that each new discovery revises our sense of the country’s ancient past. This exhibition, enriched by thoughtful interactive educational materials, represents some of the latest developments, through objects previously unseen outside China. It is a welcome counterpart to exhibitions featuring more familiar materials, such as the terra-cotta warriors.